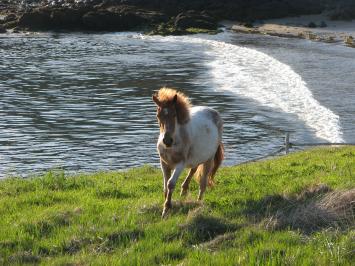 The ancient ancestors of the Newfoundland Pony arrived with the island's settlers, who set sail from the British Isles starting in the 17th century. Exmoor, Dartmoor, Welsh Mountain and Connemara ponies are among the founding breeds that, once isolated in Newfoundland, evolved into what we know today as the distinct Newfoundland Pony - a hardy creature able to withstand a harsh North Atlantic climate.

The Newfoundland pony also exhibits a rugged beauty, portrayed in the stunning images captured by our readers.

Click here to watch a slideshow of some of the best Newfoundland pony photos sent to Downhome.