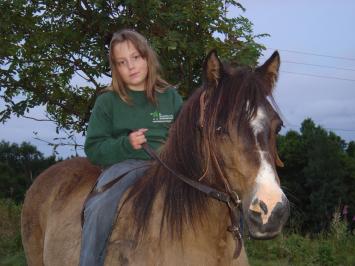 Last year I had my dream come true. I got to care for a Newfoundland pony for an entire summer - my best summer ever. The horse's name is Kit. Kit is a 26-year-old Newfoundland pony who lives on St. Brendan's Island in Bonavista Bay, Newfoundland. She is very loving and I treasure her so much. Her owners are Gerald and Brenda and they love horses just like me.

Although I don't live in St. Brendan's, my mom was working at the clinic there that summer so that is where I would be spending my vacation.

One day, I asked Gerald and Brenda if I could have a ride on Kit. They said they would let me do much more than ride her - to my delight and surprise, they asked if I could take care of her for the summer. I couldn't believe my ears. I was speechless! I had my own horse!

When I got her to my house in St. Brendan's I spent time getting used to her and she got used to me. We formed a strong bond together. I put Kit out in a massive field full of grass and raspberries. She ate grass all the time. She was very content there.

Every time I went outside, Kit would "winnie" to me and I got to ride her every day. I rode her out to Ron's Store all by myself every night to get a snack. Ron always saved something nice for Kit, too.

When we had to leave to go back home it was very hard to say goodbye to Kit. Hopefully I will see her again sometime. Kit might get sold, but I pray with all my heart that I will get to take care of her again. If I get to take Kit again some summer I might rebuild an old barn that is in the field at our house in St. Brendan's. I'm going to paint the inside purple. It will be perfect for her.

if she's lucky they might give her the pony .atleast they'll know she's taken care of,an not sent to quebec to be put in a can bound for france.

This is heart warming story about Sarah and Kit; i too was a girl who loved horses,now at the age of 60 i still love to hear stories about the ponies;it brings back a lot of fond memories, Sarah is a lucky girl i am sure her love for the ponies will stay with her,i hope you get to care for her again Sarah.