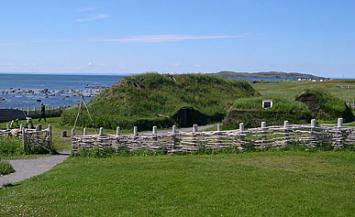 L'Anse-aux-Meadows, Newfoundland
Eastern Canada is a treasure trove for archaeologists who come from around the world to study the fascinating history waiting to be unearthed from the ground upon which we walk. In many cases, the "treasures" found date back thousands of years, or even represent our only links to entire societies and distinct cultures that have long gone extinct. Read on for a tour of some of our most ancient places.

Burnside, Newfoundland
Five thousand years of Aboriginal history lie in the Bonavista Bay community of Burnside and the surrounding area. Several Beothuk "house pits" have been uncovered in the area, as well as the largest known aboriginal rhyolite rock quarry in Newfoundland (early peoples used rhyolite to create tools). Arrowheads, stone tools and other artifacts have been uncovered in this area.

Boyd's Cove, Newfoundland
The central Newfoundland community of Boyd's Cove was once home to the long-extinct Beothuk Indians. Today, we have little left of the Beothuk peoples - but the ancient findings at Boyd's Cove have given us some understanding into their lives. Several "pit houses" were discovered and archaeologists estimate the area was once home to about 35 individuals. The last Beothuk, named Shanawdithit, died in 1829 in St. John's, after each and every member of her culture had died out. Several theories explain the extinction of the Beothuk, including that they perished after being exposed to a myriad of European diseases upon the arrival of Europeans.

Fleur de Lys, Newfoundland
The ancient soapstone quarry in what is now known as Fleur de Lys on the Baie Verte Peninsula was used by both the Maritime Archaic peoples (about 4,000 years ago) and by the Dorset Palaeoeskimos (between 1,200-1,800 years ago). Early peoples mined the soapstone primarily to create cooking pots and lamps. Today, the scars in the cliff-face (left by the removal of soapstone thousands of years ago) are still visible.

Cape Ray, Newfoundland
Dorset Palaeoeskimos once inhabited the southwest corner of Newfoundland, occupying the area that is now the community of Cape Ray. In the mid-1990s, the remnants of a Dorset dwelling were uncovered and archaeologists estimate the site was occupied between 1,200 and 1,800 years ago. Harpoon heads, blades, scrapers, knives, soapstone pots and lamps, and bones of sea mammals are among the artifacts found at the site, many of which reflect the primary occupation of the Dorset, which was hunting sea mammals.

Port aux Choix, Newfoundland
In 1967, local resident Theodore Farwell unearthed human remains while digging a basement for a movie theatre in Port au Choix. Archaeologists soon determined that what Farwell had unwittingly uncovered was a Maritime Archaic Indian cemetery. An incredible 117 human remains were found, along with bone tools - all preserved well due to the limestone bedrock in the region. Port au Choix was also once home to three other ancient cultures: Groswater Palaeoeskimo, Dorset Palaeoeskimo and Recent Indians. Today visitors may hike to a Dorset Palaeoeskimo cave and to Phillip's Garden, an archaeological site where Groswater and Dorset Palaeoeskimos once camped. To learn more about Port au Choix and its ancient history, pick up the July 2009 issue of Downhome.

L'Anse aux Meadows, Newfoundland
The Vikings who sailed from Greenland to what they called "Vinland" (believed to be Newfoundland) around the year 1,000 AD left their mark on what is now L'Anse aux Meadows, located on the tip of the Great Northern Peninsula. According to Norse sagas, the first Viking arrived here quite by accident. A storm blew Bjarni, a merchant-ship owner, off course while sailing from Iceland to Greenland in 986 CE. Bjarni swiftly made his way back to Greenland and a decade later, Leif (Erik the Red's son) retraced Bjarni's route. Leif constructed typical Norse dwellings (walls made of sod and peaked roofs made of timber and sod) and returned to Greenland with tales of Vinland. Viking expeditions soon made their way to explore the new land for themselves. However, within a few years the Norse settlers left Vinland for good after violence broke out with the natives. Despite the Vikings short stay here, they left much evidence behind. Discoveries of ridges in the earth in L'Anse aux Meadows are the remains of walls of the dwellings built by the Vikings. Artifacts found in this area (stone oil lamp, small spindle whorl, bone needle, etc.) are similar to those found in Viking settlements in Greenland and Iceland. The findings all support the belief that the Vinland spoken of in the Norse sagas is, in fact, Newfoundland. Today, visitors to L'Anse aux Meadows can explore the reconstructed Norse dwellings and learn all about the Vikings short time spent in Newfoundland.

L'Anse Amour, Labrador
Approximately 7,500 years ago, an important burial took place on Labrador's southern shore in what is now known as L'Anse Amour. It was the site of the burial of a Maritime Archaic Indian adolescent, who was placed in a deep, wide pit. Around the body, archaeologists have found a variety of ancient weapons and tools. These "offerings" indicate that this young person occupied an important role in the ancient society. There is also evidence that fires were lit around the body, food was prepared and a mound of rocks was placed atop the grave. The burial still holds great importance today, as it is the earliest known ceremonial burial in North America.

Debert and Belmont, Nova Scotia
The neighbouring communities of Debert and Belmont in north-central Nova Scotia were once home to Palaeo-Indians who occupied small seasonal hunting camps, which subsequent generations returned to over and over again. Archaeologists estimate the sites are more than 10,000 years old. Thousands of ancient artifacts have been unearthed, and include stone knives, scrapers and other tools. Remnants of blood on the tools suggest the Indians hunted caribou, long-extinct from the province.

Red Bank, New Brunswick
Located at the head of the Miramichi River in New Brunswick is the oldest continuously occupied community in the province. Traditionally named "Metepenagiag," the Mi'kmaq have occupied this area for close to 3,000 years. Two ancient Mi'kmaq sites in the area offer proof of this. The Augustine Mound is an early Mi'kmaq burial ground, and nearby is the Oxbow site, an ancient Mi'kmaq fishing village. Today, the Metepenagiag Heritage Park interprets the importance of these ancient sites, located in the area now made up of reserves of the Red Bank First Nation.

Does anyone know of an Bronze age port at St. Peters Nova Scotia. I just read some article about this being found but cannot find the article.

Neat little article. As an archaeologist it is always nice to read a little something on our own pre-history.

This is wonderful and interesting information, some of which is new to me. I think a map of NL, marking the sites, would help.