Dining at The Captain's Table 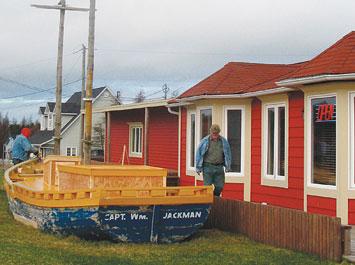 Work was being carried out this spring on the skiff that draws patrons to The Captain's Table.
Art Jackman comes from a long line of seafarers who played an important role in the history of Newfoundland and Labrador. Among his renowned relatives is his great-grandfather, the late William Jackman - a hero in the truest sense. On October 9, 1867, Captain Jackman saved the lives of 26 people aboard a ship that was breaking up on a rock about 200 metres from the Labrador shore, by swimming back and forth through cold raging seas to fetch the helpless souls.

From a young age, Art was intimately aware of the early exploits of his legendary ancestor. Art grew up in St. John's, but spent his summers on Newfoundland's Southern Shore. His parents weren't exactly carrying on the seafaring tradition; they were businesspeople who were keen to meet the needs of the communities around them - and sometimes took risks trying things out.

In 1957, for instance, Art's parents (William and Nellie) opened a take-out and confectionary in the small coastal community of Mobile, where they owned a cottage and a piece of property. Soon after, they added an Irving gas tank and pump. They didn't sell much gas because, as Art joked to his father, "there are more horses and buggies on the Shore than cars."

Art eventually moved to Toronto, where he lived for seven years until he found a job with a furniture company, and convinced his employer that a Newfoundland representative was needed. With that, Art and his family moved to St. John's, but they still spent considerable time in Mobile.

Over the years Art's own family thought up ideas for businesses they felt would work well in Mobile. His children, Lisa and Billy, even got in on the entrepreneurial action from a young age. In the 1970s the pair operated a fruit and vegetable stand in Mobile, where they spent time during the summers.

Where there's a will...
In 1987 Art decided that what was missing from the "Shore" was an eat-in restaurant. Billy turned 21 that year, and had been intending to move to Toronto to further his career as a magician, but decided to stay and go into business with his family instead. They had the land and started looking for a suitable building.

At the corner of Empire Avenue and Monchy Street in St. John's they found a building for sale. It had been a restaurant that served fish and chips, and came with cooking equipment. But it had to be moved within two weeks to make way for a new Greco Pizza that was to take its place. Further complicating the matter, the building was too big to transport in one piece.

But like the Jackmans who came before him, no challenge was too large for Art to tackle. Art hired Terry Godden, a local handyman, to saw the building in half with a chainsaw, then put it back together in Mobile.

A couple of Household Movers flatbed trucks carried the two sections - though the load was still wider and higher than some of the electrical wires that crossed the streets. Art approached City Hall about the move and was informed that he would not only need a permit, but would have to pay for police escorts and telephone, electrical and other workers to accompany the trucks along the route. Instead, Art went out with a measuring tape and measured the height of overhead wires until they found a route that would get them to the highway without causing problems. Then on a Monday morning, the least busy day of the week, they got to the highway without mishap. And where the highway overpasses were too low to accommodate the loads they simply drove off the road and bypassed the impediment, the same as you might navigate around a pothole, on their way to the Witless Bay Line.

Living off a legacy
Long after his death, Art's great-grandfather, the renowned Captain, would be playing a part in the new Jackman enterprise. Not only did the boarded walls in the dining areas give the appearance of the inside of a wooden schooner, the story of his great-grandfather's heroism was told in framed writings and photos that adorned the interior. "The Captain's Table," the name Art's wife, Phyllis came up with, opened for business in July 1987. With a policy of good, fresh food, good service and cleanliness, they did well the first year, but Billy, who has a good sense for marketing, looked for ways to attract more passing motorists.

They hired well-known artist Frank LaPointe to paint the outside of the building to resemble a fisherman's stage and wharf. Then they looked for an old fishing skiff to set out front and complete the scene.

Art heard of a skiff for sale on the beach in Admiral's Cove. At eight o'clock one morning he knocked on the owner's door. When the man opened the door Art could see that an overnight party was still in progress.

The 30-foot skiff was seaworthy and in good shape and well worth $200. However when he went to pay for her, the owner had changed his mind about the price.

"I'll tell you what," he said to Art, "you buy me a dozen Molson and you can have the boat."

And so the deal was struck.

This turned out to be one of the best investments the family made. Business significantly increased after the skiff was placed outside the restaurant.
LaPointe's mural peeled its paint over the years, so the whole building was redecorated a while back. The skiff, which has the same look as a schooner, is now in the process of being refurbished to resemble the sailing ships of yesteryear.

The Captain's Table is open from May to September, and its specialty? Why, fish of course. You may feast on pan-fried cod, bacon-wrapped scallops, shrimp, cod cheeks, cod tongues and various other fish, served in a wide variety of ways. For those who don't fancy fish, the menu also boasts several chicken dishes.

If you're driving down the "Shore" this summer, drop in and check out the story of one of the world's greatest heroes. Stay for a meal; the Jackmans will be happy to serve you.