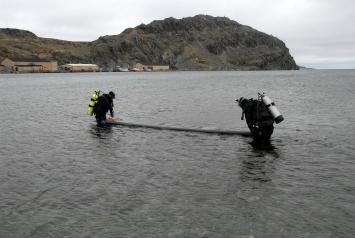 As the 2010 Celebrations for the 400th anniversary of John Guy's
establishment of the first English colony in Canada draw nearer, volunteers in Cupids are working hard to clean up the area - but it's no surface clean. Ocean Quest, the Town of Cupids and Ocean Net teamed up to host a very unique cleanup both above and below the surface of the harbour.

Despite the cool temperatures and the threat of rain on clean up day in May, organizers say it was an excellent event. Ocean Quest 2008 Diver of the Year, 15-year-old Matt Billard of St. John's says via e-mail,

"The Cupids Cleanup was a huge success. I appreciate everyone coming out today. For those of you who dove I appreciate it and so does the town of Cupids. For those who cleaned the shore the town also appreciates it. We got about five bags of garbage out of the ocean plus large pipes, signs and window frames. We also got about 15 bags of garbage from shore so today we made a big difference. Unfortunately not everyone could come today, but hopefully in the future we can choose a better time and date more convenient for everyone. Thanks again and looking forward to doing this again."


Justin Deering of Ocean Net who busily gathered debris on the beach confirms the support and teamwork among the partner groups and the Town of Cupids for this very worthwhile cause, "We had a great turnout with about a dozen or more volunteers on the land cleanup and at least five divers in the water from Ocean Quest."

Since Ocean Net was founded in 1997, more than 30,000 Newfoundlanders and Labradorians have cleaned more than 1,500 beach, shoreline, and underwater areas across the province.

See the June 2009 issue of Downhome to find out how June Hiscock, the "Queen of Clean" and Ocean Net are making a huge difference in another Newfoundland community.