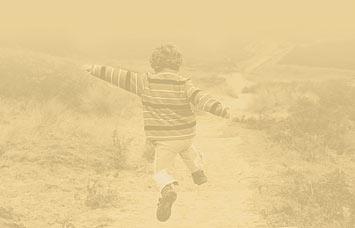 Growing up, the whole of Bell Island was a playground to me; adventure was waiting just outside my door. The cliffs, the ocean and the floppy ice pans were my playthings back then, when I was too naïve to see the perils of it all.

Looking back today, I wonder how I even survived childhood. More than once, my innocent play turned into brushes with death. But somehow, someone or something always managed to snatch me back in the nick of time, cheating the angry foe and awarding me with one more reprieve.

My first "brush with death" (and I clearly remember it) was at the age of three. I was staying with one of my relatives. Across the dirt road was a large manmade crater filled with water. I remember the water was red from the iron ore that was stripped from the terrain. One day I managed to slip outside the house unnoticed. I saw a cow drinking from the murky body of water, and for fun I chased after it. Screaming as I rushed toward her, the cow lifted her head, looked at me and ran off. Now running at top speed, I could neither stop nor veer away from the crater. I ran straight into it and quickly sank.

Next thing I remember, I was lying naked beneath a large towel on a kitchen daybed next to the coal stove. But this wasn't my home, it was my neighbour's. It was just luck that he happened to see me run into the water. Plunging his arm down to the elbow, he managed to grab my hair and haul me to safety.

Ironically, my next close encounter also involves a cow. It was three years later. Our home was situated on a couple of acres and although it was fenced, the gate was permanently open. Domestic cattle were free to roam and graze on the tall grass of the neighbours' property. (I guess this was how we manicured our lawns back then.) A calf, accompanied by her mother, wandered onto our property and proceeded to have a feed of grass. The heifer was cute and looked to me like a large living toy - and I wanted to touch it. Its mother wasn't impressed, and with its head lowered and hoof scratching the ground, I could tell that danger was near. Our shed was just a few yards behind me and I knew that I could get to the door and run inside to safety.

Running as fast as I could with the cow in pursuit, I managed to get to the door in plenty of time - but unfortunately for me, it was stuck and I could not pry it open. With my back to the shed and the beast's horns aligned to my body, I feared this was the end of my short life. Suddenly there was my mother, standing between me and the cow. With broom in hand, she rapidly and repeatedly hit the animal until it turned and went back to its grazing.

Each season presented us with new ways to challenge the dangers of the island's topography. Winter was cruel, and I certainly wasn't immune to the dangers that were hidden under the virgin snow. The inland cliff-like hillsides especially posed a threat during winter. After a heavy snowfall, a blanket of fluffy white covered the whole island - and it was playtime.

On one particular day, I was dressed in my warm garb: long underwear with thick wool socks up past my knees, a flannel shirt covered by an oversized sweater and a pair of pants that looked liked a Mounties' pants, with leather patches on the knees to prevent scrapes and wear. Over that I wore a parka, a snug-fitting cap held down by a scarf that wrapped around my face and was tucked around my neck, plus a pair of mitts joined by a string. My lined rubber boots fit snugly because of the second pair of socks. I was ready for the elements.

Sweating inside my armor and barely able to walk, I joined my friends and slowly headed for a cliff that went straight up for about 20 or 30 feet. It was excellent for jumping off and landing in the soft snow below. We headed up the slope for the freefall and one by one we jumped, landing next to each other and at times almost colliding. By my last jump we were all exhausted. My buddies were already down and it was my turn. I was tired and I dropped more than jumped over the edge. My freefall was cut short - replaced by unbearable pain before everything went black.

When I awoke the pain was excruciating; there was a gash in my upper thigh about an inch long, a half-inch wide and just as deep. Looking up I saw the blunt rock protruding through the snow where my leg had made contact. Had I jumped at a different angle I could have landed on my spine, which surely would have crippled me for life; even worse, I could have landed on my head and died instantly. To this day, the scar on my thigh is still visible.

I could go on and on about testing fate, with the cards falling in my favour. If I were a cat I would have run out of lives long ago. I am only one of many children who challenged the dangers disguised in our naïve and curious minds as "play." I suppose the small piece of earth where I spent my childhood isn't any more dangerous than any other part of the world, it's just my conception. If I had a choice to do it all over again, I would certainly pick the same venue.

Sounds like my chilhood growing up in Newfoundland. I remember jumping off a barn and driving a metal stick in my arm. The cliffs were our playground as well. Good times.