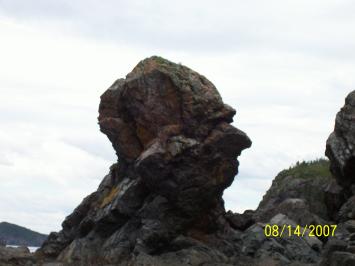 This elderly gent can be found near Brighton, NL. (Submitted by Sonya Lockhart of New Brunswick)
When we put the call out last year for your photos of natural rock sculptures, our office was inundated with amazing images - most of which we never knew existed. All around Newfoundland and Labrador - and beyond - you'll find rocks and cliffs that appear to be more than they are. Here are just some of the uncanny images we received. (Click the thumbnails to get a closer look.) For more, see the March 2009 issue of Downhome magazine.

Two Faces
Can you see two faces in the rocks? Hint: one is winking at you and the other has red hair!

Lady Picking Berries
"During a boat tour around Woody Point we seen this lady in the rocks picking berries."

Submitted by Kim Sheppard of Brampton, ON

Greek God
"I've walked along this road that we call the "Rock Cut" many times in my life, but never noticed this "Greek God" until last summer. One day my friend Colleen and I were walking along, and suddenly, there he was. Can't believe we didn't notice him before."

Viking Head
This rock formation, which resembles the head of a Viking, can be seen in Bonavista, NL.

Sphynx
This rock formation is located in Perry's Cove, NL just off Route 70 on the Baccalieu Trail.

A Head in the Cliff
"This is a picture taken after some of the cliff had fallen in. This was taken looking towards Quarry Point in Glace Bay, NS. It looks like a man with a goatee in the side of the cliff."

A Cranky Character
"This rock sculpture is found coming up from or going down to Petty Harbour-Maddox Cove (the best view is coming up from Petty Harbour). This old man (my boys think he looks more like the charactor from The Incredibles movie) overlooks the pond just before you head into Petty Harbour, close to the Hydro dam. It is fairly big in size and we comment on him everytime we go past him."

Submitted by Carol of the Goulds, NL

Sad Soldier of Old
"This was taken while on a vacation in Trinity, NL. My son says it looks like a soldier of old, like in medieval movies."

Submitted by Lori of Snooks Harbour

The Stone People of New Brunswick
This is one of the scenes this submitter saw while visiting Fundy National Park in New Brunswick. "It started with one stone person made by tourists....and carried on by others."