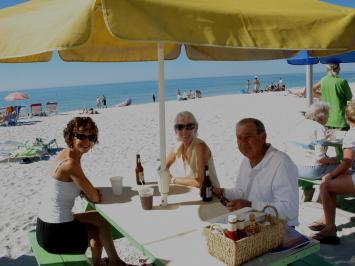 Lila and our friends Marion and Danny enjoyed the beach at Treasure Island for an afternoon.
The two weird-looking ladies who met Lila and I and our traveling companions, Dallas and Bill, outside the sunlit Tampa Airport terminal were not women at all but our (and everybody's) good friends Archie Brake and his brother Scotty, who is even crazier than Archie, if that's possible. The hugging and kissing that ensued was watched by the nearby waiting travelers, most of whom had never heard of Newfoundland, much less the "burlesque" Brakes from the sunny side of the Bay of Islands.

turned when Scotty (pictured left) jumped into the waiting arms of Dallas, who hugged him to his womanly breast and swung him to and fro. One could imagine that some of the passersby were thinking, "that woman is so happy to see her dear little old mother."

Apart from the Brakes, the Yankee Traveler Trailer Park in Largo, Florida hosts a contingent of snowbird Newfoundlanders as well as sun seekers from other US states and Canadian provinces, all of whom are friends of the Brakes. And this is where Lila and I spent the days leading up to the Downhome Cruise. The park has an entertainment centre, but once the sun reaches the yardarm the ongoing gathering place is at Shirley's and Archie's trailer. The merry-making goes on until the sun and often, even the moon, has long departed the sky. That trailer and lawn was the venue for a party (made up of people who would be accompanying us on the cruise) that greeted us on our arrival. Among the group were people from New Brunswick, Nova Scotia, Ontario, Illinois, Michigan, and Florida, as well as Newfoundland and Labrador. It seems that Newfoundland culture is rubbing off on the park residents, as mummers showed up to add merriment to the party.

We had four days in the trailer park before joining the cruise ship on the other side of Florida. We spent that time lazing in the sun, shopping and partying. And on one afternoon, our friends Marion and Danny picked us up for an afternoon on the beach at Treasure Island - a truly beautiful place (see photo, above, right).

of the park's residents attended a farewell party, which included a show put off by amateur but capable musicians and singers. Among them was Joan Tripp (nee Watkins of Twillingate), who only started playing guitar and singing recently. Joan has a good voice and is one of the park's favourites. Scotty Brake, who is ever the clown, joined Archie and the rest of the musicians on stage at the farewell party (pictured left).

Cruise Ship-Bound
A caravan of six vans took the 36 vacationers on the five-hour drive from Tampa Bay south then east through the Everglades across "Alligator Alley" to Fort Lauderdale on Sunday.

There was a Downhome hospitality desk on deck 5 and on the first day we were directed to an assigned room where everyone in our group received a cruise kit, which contained a canvas bag, T-shirt, bottle for carrying water (and other liquids) on deck, and a set of playing cards - all bearing the Downhome Cruise logo.

Club Fusion, a beautiful room with a bar, stage and dance floor, was the venue for the first get-together for members of Downhome Cruise 2008. Lloyd Johnson (of Bowmanville, Ontario, formerly of Wesleyville, Newfoundland), who along with his wife, Sue, were Downhome hosts, emceed the gathering.

Many talented and interesting individuals took the Downhome Cruise, including Bob French, who is originally from Bell Island. Bob writes a new song every day of his life. He wrote several for the cruise, which had everyone in stitches. An old friend of mine, Brendan Gillam, was also on the trip. He was a professional singer and songwriter when I met him in Toronto shortly after Downhome started. He now works in the construction industry, but performs part time professionally with Fred White, who was the last original member of the Carlton Showband. Brendan entertained the group with his original songs and unique lyrics to old ones.

Tours and excursions
The Princess cruise offers a number of sight-seeing and other events on the islands we were to visit. Apart from that the Downhome Cruise offered three of its own. The tour at St. Maarten offered hill top views of the harbour, the island of Antigua, Sunset Beach/Mayo Beach and Orient Beach, and a tour of the butterfly garden with a variety of different species. The tour also went to the French side of the island for shopping in the French capital, then returned to St. Phillipsburg, the capital of the Dutch part of the island for more shopping.

Two Downhome side tours were offered at St. Thomas, a US owned island. One tour included a submarine tour of the vegetables, animals and minerals of the Caribbean beneath the ocean, where one might see a stingray, sea turtle or shark. The scenery seekers took the other St. Thomas tour, which gave them breathtaking views of the Atlantic and Caribbean. A visit to Blackbeard's Castle and other historic sites were also part of this tour, as well as a visit to the beach.

On the ship
Some people didn't take any side trips, preferring instead to wander around the islands on their own. Linda and Dennis Burton (our friends from Twillingate), Lila and I took a taxi to downtown St. Phillipsburg at St Maarten (pictured left). Downtown

is right on the beach. The streets and the many alleys that join them are filled with restaurants and stores. Many of the stores are very small, but are nevertheless packed with all kinds of things including food, alcohol, cigarettes, cigars, clothing, but especially jewelry.

Lila went ashore with Marion at St. Thomas, as shopping is not on my list of great delights. I stayed aboard, but I was not alone. Besides lazing in the sun the ship provided many forms of entertainment. There are educational lectures, golf seminars, afternoon movies in the theatre, bingo, water volleyball, ping pong competition, youth and teen activities, bingo, ceramics and many more. The TV in each stateroom provided a variety of commercial-free movies and other shows for those who just wanted to lounge around. Great food was always available at one of the four buffets on deck 15, or in the restaurants or dining areas throughout the ship. If you wanted to stay in your stateroom you could order what you wanted and have room service bring it to you. And it didn't cost a cent.

Not all of us wanted to see movies or Broadway shows or gamble in the casinos, so we decided to have a kitchen party on deck 15 near one of the pools that had a bar. When Archie started playing jigs on the accordion and Joan started singing, the crowd of 20 or so who gathered started to grow. We were really plankin' 'er down to the delight of everyone.

The ship hosted a karaoke contest that saw more than 100 participants. Although the competition was stiff, Sharon Dove of Springdale was among the six finalists.

On December 2, Lloyd and Sue were best man and maid of honour for the wedding of Karen Kennedy and Jim Slade in the ship's chapel. I had the honour of walking the very nervous bride down the aisle.

The entertainment
A. Frank Willis couldn't bring all the equipment (drums, etc.) necessary for his usual one-man show but he did a fantastic job just the same. He had the place rockin'. Frank and I go back a long time and the cruise was almost sold out when I called him about entertaining our guests on the cruise, and after seeing the job he did I was sure glad he could make it. And so was he. One incident he says he'll never forget happened when he and his brother Newman took a taxi to town and decided to walk back to the ship. A vehicle, like nothing he had seen before, pulled up and offered them a ride back for $6 each. The vehicle looked like an open car with four bicycle wheels and was driven by foot pedals. The two were a bit tired and decided to take the offer until Frank looked in the back seat and saw that it had a set of pedals for each passenger! They decided to walk instead.

The Princess Theatre could accommodate many more than the 380 in our group and on the night the Cobblestones and Bobby Evans performed, it did. I have known Bobby Evans a long time as well and heard him sing many times, a number of times on the Gulf ferry, but I had never heard the Cobblestones before. I was spellbound with their musical variety act, which included A. Frank Willis doing several of his numbers.

Apart from having a great singing voice, Bobby Evans is a bit of a comic. His funny stories and voice imitations of Marty Robbins, Elvis and others had the place in an uproar, especially when he had a lady from the audience come up on stage to pinch his nose so he could sound like Willie Nelson. But Bobby is not the only comedian in the group. Andrew Dale who hails from Coley's Point is a natural. He can pull ad-libs out of the air to fit any situation. The whole show was a class act. Everyone was thoroughly entertained. A number of people who were not with our group told me it was the best entertainment for the whole cruise.

Who was the awesome Travel Agency that organized such a great group Trip For Downhome Cruise. There is no mention of them? Were they local? Regards, Janice