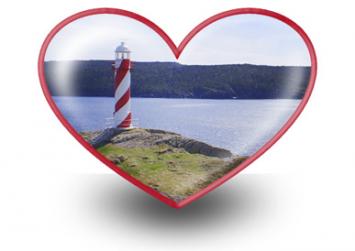 Heart's Content Lighthouse, Newfoundland
With miles of rugged, beautiful coastline and unending gorgeous scenery, the four Atlantic Provinces provide the perfect setting for romance. It's no surprise, then, that town and community names reflect those lovin' feelings. Here is a list of those romantic placenames: