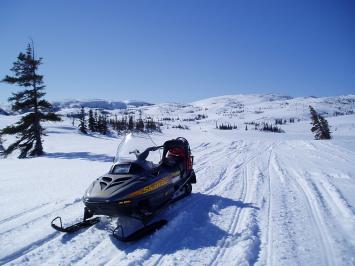 Photo by Jason of Baie Verte, NL
By Eric Humber

On March 5, 2008 I was anxious to go for a snowmobile run on the mountains and asked my brother, Fred, if he would like to come along for the adventure. Fred and I (55 and 56 years old, respectively) are extremely close brothers and on this particular afternoon I hadn't seen Fred in a few days. So I was thrilled when we embarked on our snowmobile journey together after supper. We were headed for the top of the Blow Me Down mountain.

After 15 minutes we reached Dennis's Pond. It was an overcast day and we could see the cloud ceiling toward the top of the mountain. We stopped briefly, mentioning the poor weather conditions, before heading up through the mountain pass known as Charlie's Bottom, and were at the top within 10 minutes. We continued westward across the mountain, towards the Serpentine Valley where our cousin Ray was staying at his cabin, and agreed that if the weather got too bad we would stop.

Leaving the western end of the mountain, we journeyed down through the timber at Never Fail Canyon and on to Ray's cabin. By this time the wind was really picking up and it started to rain. To our dismay, Ray wasn't at his cabin. We decided to return home the same way we'd come. Within 25 minutes it was a full-blown storm. A couple of times we stopped so I could melt the ice from my glasses.

When we got to the top of Blomidon Gulch I could see Fred gesture with his left hand. This was his way of signaling about the drop-off at the head of the gulch. Fred had previously entered this as a mark on his GPS. The hole at the top of this gulch was a drop of about 50 to 70 feet. Going into this would mean certain disaster - and out further from this gulch was a sheer drop of more than 1000 feet. Fred kept wide of this hole, swinging to the right. I could see his muted headlight as the wind and sleet battered us and I thought to myself, I would go to hell and back with this man.

Less than a minute later, I watched Fred going out over the top of a cornice, which broke into pieces under him. The next thing I knew, I was free-falling into darkness. It was like Fred and I were falling in slow motion. I braced myself for impact not knowing how deep the hole was. After about a 30-foot fall, I suddenly brought up solid, the impact ripping through my body. I could hear Fred screaming, calling to me. "I'm all right," I managed to mumble, but I knew my body was badly broken.

Miraculously, Fred wasn't injured. I could see his snowmobile buried under large blocks of ice that had broken off from the cornice. He went to work using those blocks to build a windbreak behind me. Fighting to breath, I told Fred I was going to have to spend the night on the mountain. I suggested he go and get help but he refused to leave my side, assuring me that we were getting off that mountain - and we would do it together.

Luckily, my snowmobile was mobile enough to get us out. Fred got the snowmobile up on the flat of the mountain a short distance away. Fred assisted in lifting me up and walking me to the snowmobile. We had some six miles to go to travel to my home in Benoit's Cove. Waves of pain radiated through my body over every bump and wind roll. Fred would often shout out to me to keep me awake, and no doubt for assurance that I was still conscious.

Fred stopped the snowmobile in my driveway at 12:50 a.m. I was unable to get off the snowmobile due to the pain. So my wife, Mary called an ambulance and made me as comfortable as she could, wrapping me in blankets and holding an umbrella over me.

The ambulance arrived 45 minutes later; by this time I was fighting to remain conscious. My upper body had swollen to the point where they could not get my clothing off. They had to cut my jacket and shirt off in order to assess the injuries.

We arrived at the hospital around 2:00 a.m. My body temperature had dropped, causing hypothermia and convulsing. They injected me with fluid and wrapped my body in heated blankets. I had shattered both my wrists, broken seven ribs and my collarbone. I had also dislocated my shoulder, punctured and bruised a lung, and had bruising to the base of my heart. After 12 days, I was released from hospital - but I'll never forget the events that landed me there.

I have often said to my brother, "I'm some glad Mom and Dad made you." I've said this jokingly to him (especially when he's doing work for me). Now I find myself thanking God for using Fred as his instrument to bring me back to my family.

When asked if I'll ever go back on the mountain again, my answer is yes. It's a part of my life, and my culture. I have hunted, hiked and travelled that mountain many times in my life. But that March day Mother Nature provided me with a valuable lesson about exercising caution and having respect for nature.

Life is indeed a learning experience.