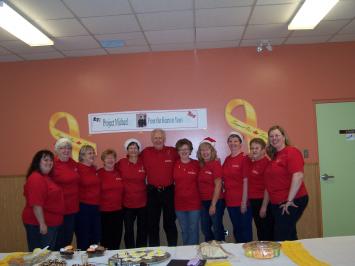 Members of the "Project Michael" organizing committee
Dear Downhome; A successful walking program in rural Newfoundland celebrates the efforts of what a group of caring individuals can accomplish in a short amount of time.

The Moving for Health group meet twice weekly for a walking and exercise program in All Hallow's Elementary School's gymnasium. We are a group that has come to care a great deal about one another.

Before our exercise program took its usual summer hiatus I had a conversation with group member Rosemary Neil. Rosemary, quietly, told me that her son, Michael, was to be deployed to Afghanistan. Rosemary was naturally fearful and apprehensive but what most impressed me was her strength, conviction, and above all pride in Michael.

never forgot that conversation. I quickly decided that our group should support her in any way that we could. Shortly after Michael left for Afghanistan in August, Project Michael was born. Michael (pictured left) became "Our Michael." He may be Rosemary's biological son, but we all became his surrogate Mom's that day!

I would be remiss if I didn't tell you a little bit about Michael. Master Corporal Michael Neil is the son of Rosemary and Wilfred Neil, grandson of Mabel Neil. He was born in Germany, where he lived for the first three years of his life. Michael's father, Wilf, was in the Army himself, so Michael lived and grew up in many of our Canadian provinces.

Two years ago, he volunteered for a tour of duty in Afghanistan. On the 25th of August he was deployed to Kandahar.

Our vision for Project Michael was to prepare 10 morale packs. We exceeded our goal by filling 24 morale packs. So our support of Michael is being extended to those servicemen and women serving alongside of him. We included a Santa hat in Michael's box so he could be "Santa Michael" and distribute the morale packs to his comrades.

In addition to usual items - such as food treats, personal hygiene products, magazines etc., we added other special things to a morale pack for "Our Michael," such as a Newfoundland flag signed by all members of the Moving for Health group, a personal Christmas card from us all and without a doubt some extra Purity kisses!

The Military Family Resource Centre thought that Project Michael was a great idea; not only did they make donations to the morale boxes, donate decorations, Tim Horton's coffee and ribbons, they also provided transportation for other families who receive support, to attend Project Michael's festivities.

Members of our group, Moving for Health, have outdone themselves. The outpouring of kindness and generosity has been overwhelming. Each and every member is to be commended - it is true that there is strength in numbers - and, as I said at the outset we would move mountains to make Project Michael a success - and in my opinion - we did just that!

and Wilfred Neil, Michael's parents (pictured left), would like everyone to know how thankful they are to all those who made Project Michael a success.


We applaud the efforts and bravery of Our Troops.