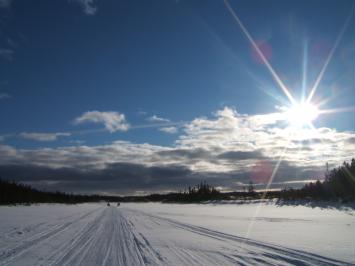 The day was remarkable, brilliant, but bitterly cold, and my husband and I were ready to head into the country on our snowmobile to spend some time enjoying the outdoors, and to visit our cabin.

I was amazed by the beauty of the day. There was no wind, and the shadows of snow and ice formations on the bushes, trees and rocks all made for a phenomenal scene that took my breath away. The magnificent beauty of our rugged land is unlimited, and exploring it is an experience I store in my memory bank, bringing it forth on stressful days, or during times of frustration and hurt. The memories are soothing to the soul if you store them carefully. And I did that day.

could see precisely what the true colours of Newfoundland and Labrador are in winter. I was in awe of the terrific vistas as we crossed a frozen pond, finally reaching the open country. Once we arrived there, I saw the great expanse of pure white, frozen land over which we would travel (see left). A popular song in our province has a line that says, "Crossing the tundra land of Newfoundland," and this looked like the tundra to me, even though the true tundra is much further north than our Newfoundland, near the tree line of the Arctic.

The flat, frozen, snow-covered land mass looked heavenly. It was so different in winter without the pond lilies, the Pitcher Plants, the mosquitoes and patches of blueberries. Now the ponds were like mirrors with their cover of ice, giving a whole new, but attractive, appearance. The huge rocks, old tree stumps, and small trees cast wonderful shadows on the white snow, while the taller trees stood guarding all they surveyed.

The snow resembled a white carpet all covered with sparkling crystals. Everything glistened, and the snow twinkled under the bright sun causing the earth's surface to produce colours like a prism, as the crystals glistened and shone with all the colours of the spectrum. It was a sight unequaled by anything I had ever seen.

The steady hum of the "snow machine," the sound of the skis on the crusty snow, passing millions of snow crystals, seeing the pond's ice cover reflecting its surroundings, was food for the soul. I realized how much we are given by Mother Nature, and how much we take for granted. My husband carefully guided the snowmobile across the barren land, as I savoured my ride on the carpet of crystals. I allowed the glorious sight to embed itself deeply into my heart and soul.

I never wanted the ride to end. The dreamlike feeling of being suspended in time and space, surrounded by priceless gems, is something I will never forget. Even some of the trees had crystal ice formations on their boughs, which made them appear purposely decorated.

Soon we were nearing our cabin. I glanced back at the frozen land, and the bejeweled carpet glistened and winked as if to say "See you soon." The whole experience of that day still lives in my heart, and always will.

Absolutely as beautiful as I remember it. Makes me remember the days when the children were young and the fond memories on the skidoos. Thank you Bonnie for sharing with us. Rose M Rideout