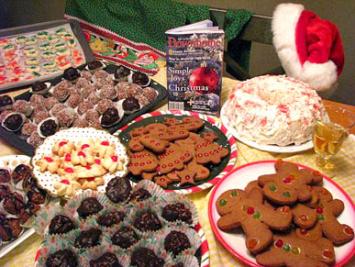 Ģ Buy cookie dough in a roll, cut into cookies and bake. The smell will fill the house and make visitors think you're a great baker.

Ģ Make an orange pomander. Take two pieces of ribbon that fit the circumference of the orange. Lay them in a criss-cross pattern, dividing the orange into four sections, and fasten the ribbons with straight pins. Next, take a container of cloves (sold at just about any grocery store) and start filling in the spaces between the ribbons. The clove-orange smell will fill the house as the orange dries out.

Ģ Stove top potpourri. Next time you're at the grocery store, buy a handful of cinnamon sticks, cloves and nutmeg nuts. Orange or lemon peels thrown in for good measure make an even spicier combination. In a small pot that you don't mind sacrificing, place enough water to cover the brew. Cook over low heat until it bubbles then reduce heat to low keeping an eye on the water level (add water if the mixture is in danger of drying out and burning to the pot). The resulting steam will waft through the house and convince visitors Christmas has arrived.

Ģ Scented candles. These come in an array of scents; choose one with a hint of cinnamon or pine (or any other smell that reminds you of Christmas) and light just before guests arrive. Just remember to never leave lit candles unattended and to extinguish them before going out or going to bed.

Ģ Slice a few apples and layer them on a cookie sheet. Sprinkle with cinnamon or apple pie spice. Place in oven on low heat for about 30 minutes. Turn oven off and allow smell to waft throughout your home.

Ģ Bake real shortbread cookies just before company comes. The smell will bring them back to Christmases of their childhood.

Ģ Wood smoke combined with anything, especially the cinnamon/nutmeg/clove simmering potpourri on the stove, will create a great country Christmas smell.