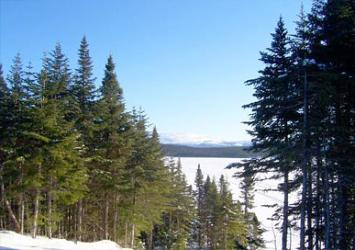 Memories. What kind of memories do most people walk away from childhood with? Thinking back, most of my happy memories over the years stem from Christmases growing up in Mount Pearl. The holidays, in our house, were huge. Everyone in my family was exceptionally nice to each other at Christmas. It was the two weeks every year when all the kids got along. (Maybe it was the fear of Santa, you know, because "he sees you when you're sleeping.") But I think it was more than that. Maybe it was that everyone was busy going to parties, doing their own thing, happy with their gifts, playing with toys or the like. Whatever it was, I just knew that every year at that time, my sisters and brother talked to me. There was no shouting, as per the rest of the year. Dad was in a good mood, and Mom would be singing in the kitchen to her favourite Vera Lynn or Perry Como Christmas record.

As the time drew near, Mom would break out all the boxes from our storage closet downstairs. She loved to decorate. I remember the smell of the dusty plastic decorations, and the baking of cookies and cakes (including fruit cakes that no one seemed to eat). The fireplace was lit and you'd get that smell of soot from the first light of the season.

One week before the great day, like most townies I guess, we set out going from tree lot to tree lot looking for the "perfect tree." Sometimes we got lucky - and sometimes we were at it for hours. (This was long before the days of imported Nova Scotian trees, and my mother wouldn't accept an artificial tree.) She would have Dad put the tree up, cutting limbs here or there, drilling holes in the trunk and jamming limbs where there were "holes in the tree." Then she would spin it so that the perfect side faced out, tying it off to each wall in the corner that was always reserved for the family tree. I remember she would put the tinsel on strand by strand, so as not a single piece was bent or overlapping. She was meticulous, but she loved it all and that love was passed on to us. All five brothers and sisters, to this day, love Christmas and decorate inside and out.

Finally, the happy day came and there was laughing and talking at 5 a.m. When it was all over, we had the usual mess of brightly colored paper strewn about. By noon the turkey was on the table and was quickly devoured.

Looking back, they were all happy times - times that I try desperately to reconstruct with my new family. And with a childhood full of memorable Christmases to draw on, I think I do it quite successfully.

Do you have Christmas memories - or other fond memories from growing up on the Avalon? Click here to submit.