It's Our Heritage - Pass It On 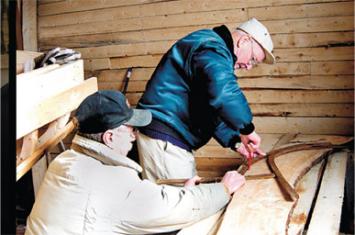 Melvin Green's father, Alfred, built wooden boats and fished for a living. In 2004, Alfred passed away. He was from a generation who learned boatbuilding skills from their fathers and passed them on to their sons. But Melvin was not a boat builder. Rather, he pursued his education and became a teacher at a time when the skill to build wooden boats was no longer needed. Store-bought fiberglass boats with fish-finding technology replaced a tradition hundreds of years old.

Melvin's story of a fading tradition is a common concern. Traditional knowledge and skills are not items that can be placed on a museum shelf to be looked at and studied later. They are intangible, making them all the more precious.

"It is at the very heart of the province and the culture and the people you work with," says Dale Jarvis, the province's first Intangible Cultural Heritage Development Officer.

"I think we're losing little bits of it all the time," Dale continues. He uses the example of the old storytellers. "Newfoundlanders and Labradorians are born storytellers and everyone can tell you some kind of story. But that old tradition of telling the long folktales, the long fairy tales, there are very few people left who know those types of stories. There aren't a lot of people left who can tell them like they used to."

Well-known in St. John's for his Storytelling Circles at The Crow's Nest, the Haunted Hike walking tours, and several books of ghost stories, Dale has worked with the Heritage Foundation of Newfoundland and Labrador for the last 13 years as a folklorist. He understands there's much work to be done to safeguard the province's intangible cultural heritage, as rural Newfoundland is rapidly dwindles through urbanization and outmigration. The younger people move away as quickly as they can. So the stories of those places aren't transmitted to the next generation," he explains.

The concern Melvin Green has over losing traditional boatbuilding knowledge in the province is a real concern - not just for Melvin, but for Dale, too.

"Traditional knowledge related to specific types of activities, I think, is going to vanish with the changes to the fishery. A lot of times, people might say, 'oh, this stuff isn't really important. It's just stuff that we do,'" Dale says. "They don't recognize how very, very special it is and how there are increasingly fewer people to do some of those very specialized things."

The field of intangible cultural heritage is something that has been talked about in Newfoundland and Labrador for a couple of years, says Dale. A provincial conference in 2006 sponsored by the Association of Heritage Industries dealt with all the aspects of our heritage that are more than just physical artifacts. From that conference, a committee was formed and a strategic plan created with the help of Anita Best, a MUN Folklore graduate (and respected folk singer), and the Department of Tourism, Culture and Recreation.

"One of the recommendations was that there be a position to oversee all this cultural content that could happen in the province. I was involved in the very early stages," Dale says. The job is the only one of its kind in English-speaking Canada, he notes.

Quebec is the only other province to install a provincial folklorist. While there are state folklorists in the U.S., "we're at the cutting edge of this type of work," Dale says.

The goal this fall is to develop training courses and workshops for people interested in securing their intangible cultural heritage.

"We'd like to be able to go into communities and help give them the tools to start documenting some of their intangible cultural heritage, some of their local history and culture," Dale says. "Part of that is doing oral history work, but it's more than that. I think of oral history as things that have happened in the past and people's memories of what has happened. But a lot of intangible cultural heritage are things that are still alive now and the knowledge on how to do things. So it's not collecting stories. It's about trying to teach people how they do what they do now."

Boatbuilding is a good example, says Dale. Before he started his job in April, the Winterton Boat Building Museum had already taken steps to secure the tradition of boatbuilding - with some guidance from Melvin Green.

When Melvin turned 60, he began working on a boat with his father and his brother. "We started an 18-foot rodney using the family moulds (a three-piece template that could be used to cut out all the ribs of the boat). These moulds could be used to build any size boat while maintaining the age-old design that had proven over the years to produce a seaworthy boat," Melvin explains.

"Around the same time I was getting back to our roots with boatbuilding, I also got involved with a group who wanted to start a community museum. It was decided to use boatbuilding for the theme of this museum. The boat we had started was moved to the museum and finished there," Melvin says. Two boat builders, his father Alfred and Marcus French, provided the guidance, tools and materials to get the museum started.

Alfred and Marcus have both passed away since the museum opened, and the search is on to fill the gap in traditional knowledge that they and others have left behind.

"Boat builders designed different boats for different purposes and were able to make all the tools and gear needed to carry out whatever type of fishery they were engaged in," Melvin explains.

"In the past year, we have been reaching out to other regions of the province to find boat builders and enthusiasts and convince them to join with us," Melvin says. "We have been doing some research and have found that, in certain regions more than others, there is still some wooden boatbuilding activity and most of these builders, although elderly, have a keen interest in passing on their knowledge and skills."

"Boatbuilding is no different than playing the accordion or fiddle, speaking our dialect or making barrels. Use it or lose it," he says.

"I am now in my 60s and realize that I waited too late to master my father's boatbuilding skills. I have his boatbuilding tools, his boat moulds, etc., as do many boatbuilding families. Will they become silent museum pieces or will we be able to put them to use and pass them along to the next generation?" Melvin asks.

He hopes that the boat builders and boat model makers of the province will come forward and become involved, with the help of the museum. To date, there are 160 active boat builders and 123 inactive, all ranging in age from 35 to 85.

While the Winterton Boat Building Museum has taken the initiative to connect with boat builders in the province and find ways to keep the tradition alive, Memorial University has started a Digital Archives Initiative where folklore items are stored and shared. It's incredible to be able to interview someone with a traditional skill and put that video online where anyone in the world can learn how that's done in Newfoundland and Labrador, says Dale Jarvis. "We would love to put all the intangible cultural stuff online," he adds.

"A lot of this (intangible cultural heritage) is what makes the province special," he says. "If we lose it, you sort of become nothing, I think. You become a place that has no history, that has no culture, and who wants to live in that sort of place?"