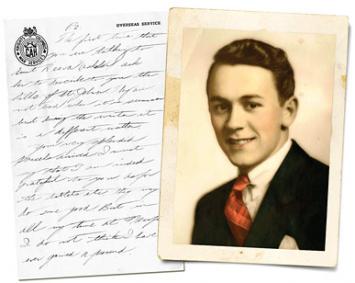 Kim Kielley pieces together the last days of Able Seaman Giles through letters he wrote to his family while he was stationed in St. John's as a Royal Canadian Naval Reservist during the height of the Second World War. Here is a transcript of his very last letter, dated Dec. 9, 1942 - three days before he died in the Knights of Columbus fire.

By this time you must be thinking that I had forgotten you. However, during the last while I have written very few letters.

The months have rolled around so quickly. I came here in the summer and now it's Christmas. It seems unbelievable when one considers how much has taken place in that time.

The first time that you are talking to Aunt Reeva ask her to describe to you the hills of St. John. They are not bad when it is summer but during the winter it is a different matter.

Your very splendid parcels arrived. I must say that I am indeed grateful to you. As for the tablets, etc. they may do some good. But in all my time at Newfie I do not think I have ever gained a pound.

For about a month I had quite a time. There were a number of chaps stationed here with whom I seemed to get along very well with. We had quite a click, so to speak. They all had fairly permanent jobs. One of them was from my original Varsity class. However during this last week they have all been drafted to sea.

In this job you have to keep making new friends all the time. It seems queer, but certain times of the year seem easier than others because of recreational opportunities. The belt that Bill sent was splendid. I feel very much indebted to him. The one that he gave me has caused many compliments. Very few people seem to have thought of leather work as a hobby.

During the last week I have purchased all the nylon silk that is left in Newfoundland. I am sending a couple of pairs to you and Ruth.

Please understand when I say that I am not sending Christmas presents. It doesn't mean that I have forgotten you people or any of my other friends. But I am this year unable to do such in the manner that I would like to. Part of it is due to distance and travel and I regret to say some other causes.

Living on shore may seem very nice etc. but it has been very severe set backs. In all the time I have been in Newfoundland I have tried to live as close to the life I did in Halifax...Just how soon I shall be going I do not know. At any rate I have all my gear etc. ready to make the move...

I still live in the hostels here. It seems to have been to my physical advantage since I have not had a cold or anything since I gave up sleeping in the office.

Please don't think that I am writing excuses etc. because I am sorry to say I do not consider them so. Working in contact and in a job where you see across so many chaps in difficulties I must admit in some cases I have been too sympathetic. It has been very costly.

This letter has been very personal throughout. I regret that it hasn't contained much news.

Hoping to hear from you soon.