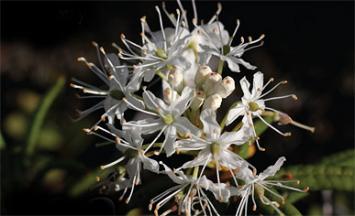 Labrador tea, also known as Hudson Bay tea or Indian tea, is made from the leaves of the Labrador tea plant, which grows wild in marshy areas of northern Canada. It was traditionally used by aboriginal people for medicinal purposes, to cure a wide range of ailments. Because of its narcotic properties, the tea was often given to women just before childbirth. These same properties, though, make this herb dangerous in large quantities - an overdose can lead to paralysis and even death.

snapped up for souvenirs by tourists today, Innu tea dolls served an important purpose during the Innu's nomadic days in Labrador. The dolls were made by the women using broadcloth for the bodies and caribou skin for the faces and hands. The bodies were stuffed with two or three pounds of loose tea and given to the children. In this way, the little ones did their part in carrying supplies while their families travelled the countryside in search of food.

In the book Once Upon a Mine: Story of Pre-Confederation Mines on the Island of Newfoundland by Wendy Martin, there is a description given of "Quarries' tea." A visitor to the Gaff Topsails granite quarry near Buchans explained how men made tea on site. "Tea in Newfoundland is boiled. When it has boiled it is taken out and reboiled. At the seventh steeping the tea has taken on those qualities for which tea is (in Newfoundland) esteem...The Quarries' tea is often kept boiling seven months! That is to say, what has been put into the cauldron in April is still sizzling merrily in October..."

is the art of reading tea leaves to tell the future. It originated in Asia and Europe, and made it across to Newfoundland homes, though the practice began to disappear along with loose tea after the advent of the tea bag. Basically, when one finished a cup of tea, the reader would look for a pattern in the leaves at the bottom of the cup for signs of things to come. Similarly, in the Middle East, Turkish leftover coffee grounds are dumped from a cup onto a plate and then "read."

Oil extracted from the leaves of the tea tree, native to Australia, is commonly used in herbal remedies. It has a strong odour of camphor, making it a helpful inhalant for cold sufferers. It also has anti-fungal and antiseptic properties and has been used in poultices to treat wounds. Lighthouse Crafts of St. John's is using tea tree oil in its all-natural bug repellent, which it claims has been proven effective against mosquitoes and black flies in northern Newfoundland, Labrador and Ontario.

The "elevener" is a break for tea and a snack (likely a bun or slice of bread) at 11:00 a.m. still observed by many Newfoundlanders of the older generation. Whether at home or at work, everything stopped for the "elevener" or "levener."

Newfoundland and Labrador, Tetley and Red Rose are the most common orange pekoe tea brands. But when Sir Elton John came to play in St. John's and Corner Brook last month, do you know what his tea preference was? PG Tips. The Red Rose tea company was started by Theodore Harding Estabrooks in New Brunswick in 1894. Initially sold just in Atlantic Canada, by the 1920s Red Rose was being shipped across Canada and into the United States. Interestingly, in 1932 the business was sold to Brooke Bond and Company in the U.K., maker of PG Tips. In 1985, Unilever NV bought out Brook Bond and Company and sold the American rights to Red Rose to Redco Foods Inc.