In the Service of Others 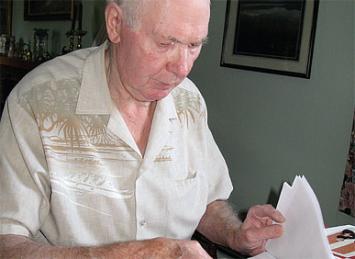 Jim Shields, now 87, looks over wartime memories.
On the eleventh of this month we remember those who served in times of war. One of those is Jim Shields of St. John's, a veteran whose service to his compatriots continued long after he left the battlefield.

Jim was 18 when the Second World War was declared in 1939 and the Royal Navy made its first call for recruits from Newfoundland. At the time the Navy was only accepting fishermen because of the reputation they had earned during the First World War as the best small boatmen in the world. During that conflict, German ships travelled the "Northern Approach" to Germany - the roughest part of that side of the North Atlantic - where the British could fire on them but were unable to get close enough to capture them. Only the Newfoundlanders, used to such conditions at sea, were able to transport Royal Navy crews into large rowboats in heavy seas so they could board the German vessels.

A butcher by trade, Jim was not eligible to sign up until the fourth call went out in February 1940 and the Navy relaxed its requirements. As soon as he could, Jim left his job, his membership in the Church Lads Brigade, and his sweetheart Olive Noseworthy to enlist.

His first assignment was aboard HMS Derbyshire, a merchant marine vessel that had been converted into an armed patrol ship. For the first several years Jim was involved in transporting troops, mostly to North Africa via the Suez Canal.

In 1942, Jim was assigned to the anti-aircraft cruiser Curacoa. He was on a train to Hull, England, Curacoa's home port, when the Luftwaffe bombed the railway tracks. As a result, Jim missed his boat - which probably saved his life. The Curacoa was accidentally rammed by the Queen Mary; 553 of the 650 sailors on board were killed. Jim learned of the incident when he boarded the Queen Mary in Scotland for his new assignment, bringing Landing Ship Tanks (LSTs) built in Boston across to England for the subsequent invasion. (The bow of the LST is hinged and folds down to make a ramp for offloading tanks, guns, equipment and troops.) The huge hole left in the Queen Mary's bow by the Curacoa had to be filled with concrete for the trip across the Atlantic.

Jim joined one of the 115-foot long, flat-bottomed LSTs in Boston as far as Halifax in December 1942. Given three weeks leave, Jim headed home to spend Christmas in St. John's with his family, friends and his sweetheart, Olive.

During the war, Olive had been volunteering at the canteen in the Knights of Columbus Hall where troops were entertained. That December 12 the hall burned to the ground, taking the lives of 99 people. Olive and Jim might well have been among the victims who had gone to the hall for a dance - if they hadn't chosen that day to get married instead.

After his leave Jim returned to duty aboard LSTs. He and his fellow sailors made many trips between Tripoli and Italy during the invasion of Italy, particularly to Sicily and Salerno, where German guns showered them with shells from the nearby hills.

In spite of wartime tension, Jim recalls one humorous incident while attempting to land at Salerno. Before Jim's LST made it to the beach it ran aground on a sand bar some distance from shore. The captain tried reversing the engines, rocking the boat and moving the weight around to refloat the vessel, to no avail. An American driving a tractor on the beach saw their predicament and yelled out to them, offering to use a cable and his tractor to tow them off the sand bar. It seems preposterous, yet despite nearly burying his tractor in the sand with the effort, the American managed to free the big vessel.

After Italy, the LSTs were assigned to transport troops and equipment to the beaches in Normandy, where the invasion of France was already underway.

Service Beyond the Call
Following his discharge from the Navy in 1945, Jim became an active member of the Great War Veterans Association, which later assimilated with the Canadian Legion. In 1960, he was a founding member and the first president of The Naval Association of Newfoundland Eastern Division. Among the services performed by the association was assisting veterans who were incapacitated in some way, particularly those in the DVA hospital in St. John's. Members made sure the sick, crippled and wheelchair-bound made it out to memorial parades and other events, and they visited veterans who had been admitted to the DVA hospital from other parts of the province, to make sure all their needs were met.

Most recently, Jim was instrumental in having a memorial erected three years ago to the naval servicemen from Newfoundland and Labrador who died for their country. That monument, displaying 373 names, stands in front of the Marine Institute on Mount Scio Road in St. John's - lest we forget.