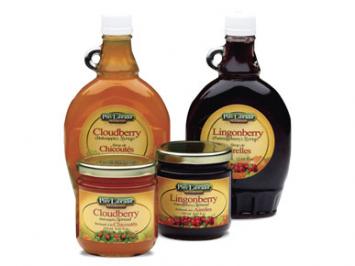 Delicious Desserts
Finish off the perfect Thanksgiving dinner with a delicious, down-home dessert. Whether you're whipping up elaborate dessert pastries to serve to your dinner guests, or you're planning on digging into a bowl of ice cream, these gourmet spreads and syrups made by Pure Labrador, located in Forteau, Labrador, add a tasty hint of home. Choose your favourite among cloudberries (bakeapples), lingonberries (partridgeberries) or blueberries - picked by hand from the barrens and marshes of Labrador.

Relish
Move over cranberry sauce! Why not try a slightly different taste with your turkey dinner this Thanksgiving? Manufactured by the Dark Tickle Company in Griquet, Newfoundland, this tasty condiment is made from local wild partridgeberries. This traditional Newfoundland recipe goes great with poultry and wild game - good news whether you'll be opting for a standard turkey dinner, or you plan on serving up a feast from a successful fall hunting trip!

, Local Vegetables
This fall, spring for locally grown veggies for an even tastier Thanksgiving dinner. Check out nearby farms for produce, which will be fresher and more flavourful than vegetables of the frozen or foreign variety. Plus, you'll be supporting the farmers in your community or region and doing your part to reduce greenhouse gas emissions that result when food is transported over long distances to your dinner plate. You'll often find a wide variety of veggies available at a farmer's market, or even at a small roadside stand, which are quite common in smaller communities in Newfoundland and Labrador. Here is a list of locations where fresh veggies can be purchased in this province: Cormack Farmer's Market, Deer Lake; L.A. Farm Market, Gambo; Lester's Farm Market, St. John's; Organic Farm, Portugal Cove; Riverbrook Farms Country Market, Corner Brook; St. John's Farmer's Market, St. John's.

Well Wasted
Plan to have some Thanksgiving fun making fall crafts with the kids over the long holiday weekend. This family Web site is jam-packed with simple, yet adorable, crafts to suit the autumn season. Try your hand at making the "Tin Can Turkey" to fill with candies for your dinner guests. Provide your child with a recent family photo and let them create their own "mosaic frame," featuring the vibrant colours of fall. Or, help your kids trace their hands and feet to make a turkey using those cutouts - this will make a great keepsake! For these and many more crafty ideas, visit crafts.kaboose.com/holidays/thanksgiving.