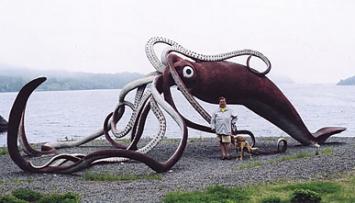 When you drive through central Newfoundland, you might notice the larger-than-life statues, replicas and other interesting attractions that seem to be around just about every turn. The following landmarks and their communities are scattered throughout the central region of the island, but we know there are more to be found all over the province and beyond - and we're asking you to show them to us! The next time you see a larger-than-life landmark, have your picture (or someone else's picture) taken with it, and send it in to us for a chance to appear in a special photo feature. Click here to submit.

Opened in 1995, Joey's Lookout (featuring a huge "head shot" of Joey Smallwood himself) is a patio deck where motorists get a break from highway driving and take in a scenic 200-degree panoramic view, which includes the Gambo River Valley, the Gambo Railway Trestle and surrounding wetlands. Here, you'll also find interpretive panels that detail the community's history. Don't leave Gambo before a visit to the J.R. Smallwood Interpretation Centre, which contains exhibits, photographs and memorabilia regarding Newfoundland's first premier. If you need to stretch your legs, embark on the Smallwood Dominion Point Trail from the interpretation centre, for a tour of the wetlands.

Harbour
140 km from Gambo (1 hr. 45 min. drive)
The most impressive feature in beautiful Banting Memorial Municipal Park is undoubtedly the replica of the plane that crashed in 1941, tragically killing Sir Frederick Banting - the celebrated co-discoverer of insulin. For information about Banting, his discovery and the crash, visit the Banting Interpretation Centre. While at the park, take a walk along the miles of sandy beach, have a picnic, or enjoy a round of mini-golf. The Fisherman's Museum in Musgrave Harbour is appropriately located in the first retail store operated by the Fisherman's Protective Union. The structure was built in 1910 and now contains artifacts relating to the fishing industry.

Cove
80 km from Musgrave Harbour (1 hour drive)
Renowned local artist Gerald Squires designed this bronze statue, called "Spirit of the Beothuk." To find it, follow the 1.5-km groomed walking trail that begins at the Boyd's Cove Beothuk Interpretation Centre. Along the trail, you'll see outlines of several dwellings, evidence that Boyd's Cove was once home to the now extinct Beothuk Indians. Excavations in the area have turned up a number of artifacts from the Beothuk culture, including stone tools - some of which can be viewed at the interpretation centre. Don't forget to bring a camera with you on this trail, where you'll also find a beautiful waterfall.

41 km from Boyd's Cove (31 min. drive)
If you're interested in learning the inner workings of the cod trap, a staple of the province's once robust cod fishery, visit the interactive display outside the Prime Berth Museum on the causeway that connects New World Island to south Twillingate Island. Local guides will even help you try your hand at mending a cod trap, an activity that was second nature to our forebears in Newfoundland and Labrador. Other museums to visit in the area include the Twillingate Museum in an old Anglican church rectory, and the Northeast Church Heritage Museum on the south side of the community. If you happen to be visiting Twillingate between March and July, keep your eyes peeled and your camera poised for iceberg sightings, after all, you are in the "iceberg capital of the world."

3 km from Twillingate (2 min. drive)
You'll have to make a pit stop at the Durrell Museum (located on the South Twillingate Island) to see this mounted polar bear, which almost looks alive! This huge animal became trapped on the ice in Twillingate harbour in 2000 and, deemed a danger to the public, had to be destroyed by wildlife officials. The building that houses the museum was originally used as a meeting and training base for the Arm Lads Brigade, an organization founded in 1908 by an English war veteran who sought to bring discipline to the boys of Durrell. You'll learn all about this historic organization, as well as other community heritage, at the museum. Once your tour of the museum is complete, spare some time to relax and snap a few photos just outside the building, where there is an incredible view of South Twillingate Island.

75 km from Durrell (56 min. drive)
The real strawberries at Campbellton Berry Farm might only be ripe for the picking during certain times of the year, but this structure - painted to resemble a giant strawberry - can be seen year-round! The farm is 15 acres of berry fields filled with neat rows of strawberries, raspberries, black currants and gooseberries that visitors may pay to pick. Or, if you'd like to sample the tasty fruit without the work, you may purchase pre-picked berries at the farm. You'll also find Newfoundland ponies and a flock of peacocks on the farm, making it a fun afternoon for the whole family! Once you're finished at the farm, you'll probably be ready for a tasty meal - if you haven't eaten all your berries, that is! Consider stopping at The Bistro at the Old Mill Ruins for "fine dining without the fine dining price," the restaurant's Web site declares.

76 km from Campbellton (57 min. drive)
Located near the shore in Botwood Heritage Park is this restored PBY Catalina Flying Boat - one of only 35 remaining in the world. During the Second World War, the aircraft was used to spot submarines off the coast of Ireland and went on to serve as a water bomber for the Newfoundland Forest Service before being retired in 1987. After marveling at the aircraft, head inside the nearby Botwood Heritage Centre. The building, built in 1937, was a terminal for flying boats until 1945 and now contains exhibits that detail the community's heritage. If you're up for a hike and a generous measure of stunning scenery, walk the trail that leads to Killick Island. Once there, you'll be standing at the perfect vantage point to snap photos of beautiful Botwood harbour.

Glover's Harbour
50 km from Botwood (37 min. drive)
Glover's Harbour is famed as the landing site of the world's largest recorded giant squid, a monster from the deep measuring 55 feet. To get a feel for just how large that is, you may visit a concrete replica of the beast in the community and visit the nearby interpretation centre for more information on this incredible discovery (see photo above). Near the entrance to Glover's Harbour, embark on the Bayview Lookout Nature Trail. At the end of the two-kilometre hike, you'll be rewarded with a beautiful view of the town.

185 km from Glover's Harbour (2 hrs. 15 min. drive)
Standing about 30 metres tall in the western end of Buchans is the Lucky Strike deckhead. This steel skeleton, which marks the community's best orebody, was designated a Municipal Heritage Structure last year. The deckhead looks most impressive at Christmastime, when the town decorates it with lights that can be seen far and wide. The deckhead is so prized because, as a town built around the mining industry, the structure is a physical representation of Buchans' heritage. Visit the Buchans Miners' Museum to learn more about the history of this mining town. If it's hunting you're into, local outfitting companies will make the perfect getaway. On your way out of town, grab a bite to eat at the Lucky Strike Restaurant, which serves delicious home-cooked meals seven days a week.