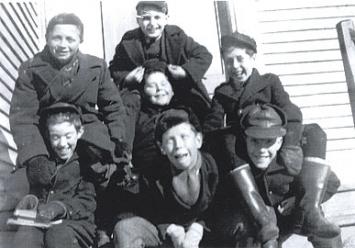 This photograph was taken in the early 1940s of schoolboys at the R.C. Academy in Carbonear. In the front row are Paul Withers, Unknown, Peter Withers; middle: Emmett Finn; back row: Unknown, Gerard Finn, Bill Keough. "Any help your readers could provide in identifying the two unknown students would be appreciated.

Can you help solve this mystery? If you recognize the "unknown" children in this old photograph, leave a comment (below, right) and tell us who they are.