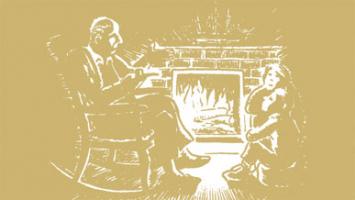 The following story appeared in the October 1990 issue of the Downhomer in the regular "Fireside Yarns" feature.

When I was a young boy I lived with my family in Freshwater Valley (what is now known as Pippy Park). That was at a time when motorcars were very scarce, so most folks owned a horse or pony. My dad had a big white horse and that animal had a mind of its own. When he got tired of our back garden he would stand at the gate, switching his tail to keep the flies airborne, and lift the gate latch with his nose. When the gate opened, he'd head for Three Island Pond Barrens on a fast trot. The day I'm now thinking of was no exception.

I looked out through the window; the gate was open and there was no horse to be seen. In the evening when Dad came home from work, Mom had a good meal ready. When we were finished eating, Mom gave me a nudge with her foot - her way of telling me to break the bad news. When I told him, he gave me a quick look and said, "What was my son doing while the horse was opening the gate?"

Mom added her two cents' worth, saying, "If he spent as much time with the horse as he did with that old trouting pole, this wouldn't have happened."

They both sat there trying to make me feel guilty for the horse's escape. After his meal, Dad decided to go look for the horse. I watched him go to the barn and, judging by the speed with which he closed the barn door, he still was not pleased.

As he passed by, I said, "Would you like for me to come along?" He screwed up his face and in a loud voice, said "No!"

So I sat there looking out through the window, feeling quite low. Then Dad popped in front of me and gave me a start. He said, "Get your coat and come along."

While I pulled on my rubbers, Mom passed my coat and said, "There's a cake of hard bread in the pocket for the fairies if they try to take you."

By the time I reached the road, Dad was already crossing O'Leary's Bridge and heading for the high country. I ran as fast as the heat of day would let me, and when I caught up he was walking at a fast pace and whistling - something he only did when he was in a bad mood.

We walked in single file for a mile or so before Dad gave up the whistling. I guess he ran out of steam, or maybe it was the sight of the forest, the smell of newly mown hay, and the sound of water running over the rocks in the little brooks we passed. Either way, it was obvious Dad's mood had changed.

He looked back and asked, "Are you tired?" After that forced march my throat was so dry it took three or four tries to say, "Yes."

We sat on a big rock for a short rest before Dad got up again and said, "Come on, son, let's shake a leg."

By the time we got to Three Pond Barrens it was late in the evening and all that was left of the sun was an orange glow in the west. As we searched the marsh at the head of Third Pond, we noticed the fog creeping across the water. After a short search with no luck, Dad decided to check the other grassland. While looking for the path that would get us there, the fog became quite thick and soon we could only see a few yards in each direction. Dad said we'd have to find some shelter until the fog lifted.

We groped our way to an old cart path and followed it for a short time until we came to a big tree. Dad said, "We'll stay here," and we broke off some branches and laid them under the tree. I spread my coat over them and, after we lay down, Dad covered us with his oil clothes. He was very tired and soon he was snoring.

As I lay there, I began to hear sounds coming towards us. I woke Dad and we both sat up. He could hear it, too, and said, "It could be the horse coming for the feed."

As we stared in the direction of the sounds, I expected to see our big white horse coming through the fog. Imagine my surprise when out of the mist came a coal black horse drawing a hearse, upon which was a black coffin. My body went numb as if I'd been struck by lightning. But what nearly finished me was the driver - his head was missing. And there were mourners walking behind the hearse, all of them headless!

A cold rush went up my back right to the top of my head. I watched the funeral move along the path and vanish through the fog. I'd almost forgotten that Dad was with me and I looked over at him. He was sitting with cap in hand, eyes wide and sweat running down his face. My first thought was to get out of there as fast as my feet would let me, but with the fog so thick, Dad said we had to wait. I took the cake of hard bread and threw it towards the path for the fairies, should they come, too. I cuddled close to Dad and eventually fell asleep.

Next thing I knew, Dad shaking me awake. "The fog has lifted; let's get out of here!" he ordered. We came to the end of the path and now we could see the open barrens and the heavenly sun peeping over the horizon with the promise of a beautiful day. I took one last look at the lonely path where we spent the night and was glad to be going home. Dad pointed and said, "There's the horse!"

Dad held out the feedbag and our white horse came over at a fast trot. Using a piece of rope for reins, Dad climbed up on his back. With all the strength I had left, I climbed up and sat behind him. With the horse at a gallop, and my arms locked around Dad's waist, we headed for home.
MORE ARTICLES
load more