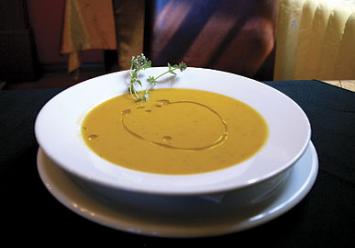 Coconut-Curry Butternut Squash Soup
One 3-lb squash, peeled, seeded and diced
2 onions, diced
2 cloves garlic, minced
1 tbsp Thai yellow curry paste (available in 100g tins or 500 ml plastic tubs at Asian markets or in the Asian section of the supermarket. If not available, use 2 tsp curry powder for a similar flavour)
1 can coconut milk
1 small ripe banana, mashed
2 tbsp Lady of the Woods birch-sap wine (made in Newfoundland and available at liquor stores, although any white wine or even sake will do)
4 cups chicken or vegetable stock (water will do - if using canned stock, omit salt)
2 sprigs fresh thyme (or 1/2 tsp dried)
1 tsp salt (or to taste)
Black pepper to taste
2 tbsp each oil and butter

Heat oil and butter in deep saucepot; add onions, squash and thyme. Cook, stirring, until it all starts to caramelize (3-4 minutes). Add garlic and saute another minute or two. Add curry paste and stir a couple minutes more. Add the wine and let reduce a minute, then add coconut milk. Add the salt and pepper. Let reduce a few minutes. Add stock and the banana and boil until squash is soft. Purée soup in the pot with a stick blender (or transfer to a regular blender). For a velvety consistency, strain through a medium seive. Taste and adjust for salt or pepper. Garnish with a little toasted coconut or a dollop of sour cream.

How to pick 'em:
At the supermarket, look for a firm unbroken rind with uniform colour - free from green tinges. If you can push a fingernail into the rind of a squash it is immature and will be lacking in flavour and sweetness. Squash should feel heavy for their size (indicating a high moisture content - squash gradually lose water after harvesting).

Did you know?
It is believed that squashes have been cultivated for more than 5,000 years, and were grown by the Incas in the fifteenth century

Winter versus summer:
The split between winter and summer squash is based on usage, rather than botanical classification. Winter squash, such as butternut, acorn and pumpkin, are harvested when mature, with hard skins. Summer squash (including cucumber and zucchini) are eaten when immature and usually have an edible skin and mild-flavoured flesh.

Nutritional value:
Butternut squash is rich in complex carbohydrates (the good kind!). One cup contains three times the recommended daily allowance of vitamin A, half the day's supply of vitamin C, 3 grams of fibre and only 63 calories. A great source of beta-carotene, magnesium, manganese, calcium and potassium.

Storing:
Squash keep very well. In a cool (not refrigerator-cold), dry, well-ventilated place they can keep for three months or more. At room temperature, or in the fridge, they should last a couple of weeks.

For printable recipe cards of the leftover Thanksgiving turkey recipes that appear in this month's issue of Downhome, select the following links and then click "FREE Recipe Card."