Serving up Big Macs in Beijing 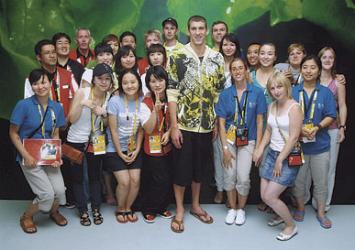 This August, the top athletes from all over the world gathered in Beijing, China to showcase and celebrate their skills in the ultimate sporting competition: the summer Olympic Games. Sharing in the Olympic excitement, but not the spotlight, were employees selected from the world's top-performing McDonald's restaurants to work at the Games. Six managers from McDonald's locations in Canada were chosen for this once in a lifetime opportunity. Paul Rogers (pictured below), manager of two McDonald's restaurants in Grand Falls-Windsor, was one of them. Downhome caught up with Paul to chat with him about his whirlwind experience working at the 2008 Beijing Olympic Games.

Q. So, how did this all start?

A. McDonald's is constantly doing different incentives for different programs, and they ran an incentive during the last six months of 2007 based on the performance of the restaurants, and the top six managers would get the opportunity to go to Beijing. We (McDonald's at Cromer Avenue, Grand Falls-Windsor) were one of the top six stores in the country - out of 1,400 restaurants.

Q. Congratulations! How did your fellow co-workers at McDonald's react to this great news?

A. They were surprised and delighted that the restaurant was in the top six (and a number of them were jealous that I was going and not them!). In actual fact, I got the opportunity to go to Beijing - but without all the staff, the owner/operators and everybody working together, it wouldn't have happened.

Q. Tell me about the trip.

A. The six Canadian McDonald's employees were all pretty much overwhelmed from the moment that we arrived there to the time that we left there. The things we did, the things we saw, and the opportunities that were given to us were just unbelievable. We were there for 12 days, and in the 12 days we worked five six-hour shifts - four at the Olympic Village serving the athletes and their coaches, and one shift at the media centre. That was the work part of it. Then we attended a couple of different Olympic events. They (the McDonald's Olympic Champion Crew Program) also toured us around Beijing and China a little bit; we went to the Great Wall of China, we went to Tiananmen Square and the Forbidden City, the Temple of Heaven, and they took us all out for an evening at a typical Chinese restaurant downtown in China. So they kept us busy...it wasn't all work for us and even when we were at work it was a lot of fun. Just being in the Olympic Village and to see the facilities that they had for the athletes, it was just amazing.

Q. Which Olympic events did you get to see?

A. We went to women's water polo, and we went on a Friday evening to the Bird's Nest Stadium to watch the athletics.

Q. Did you get to meet any athletes?

A. [/b]Michael Phelps we met, actually, after one of our shifts we went to McDonald's on the Olympic Green and it was the day after he had won his eighth gold. They brought him up and we were able to meet him and get some pictures taken. It was pretty chaotic when he was there; there were a lot of people who wanted to take pictures and get to meet him. That was one of the highlights. But at the Olympic Village at the restaurant we were serving the athletes, so we were constantly meeting them.

Q. Are you a big fan of the Olympics?

A. I normally watch it, not with a great lot of interest. I'm not a sports fan as such, but this certainly turned things around for me! When we were there serving the athletes I'd turn around and one of the guys would say, "Do you know who that was?" so amazed that we'd actually served them. And I'd say, "No." And they would name off the athlete. For someone that knew the athletes it was amazing to actually see them in person, and even just for myself it was...wow!

Q. Do you enjoy travelling and do you get to travel often?

Q. When you started working at McDonald's 29 years ago, did you ever imagine the opportunities the job would bring?

A. Not in my wildest dreams, no. I had started off on a part-time basis like a lot of students, just earning some extra cash for pocket money, and the opportunities just kept presenting themselves - it's been amazing.

Q. The next Olympics will be held in 2010 in Vancouver. Any chance you'll be going?

A. Never say never! If anybody had asked me two years ago if I was going to Beijing to go to the Olympics I would have said, "You're crazy, there's no way!" But back in February this year, the opportunity was given to me.