My Journey to NL as a War Bride 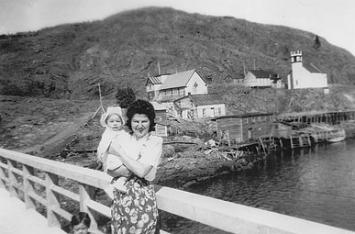 On March 16, 1946, I left the city where I was born (Leeds, UK, population 500,000) to embark on a hazardous journey to my husband's home in Exploits, Newfoundland. Accompanying me on the train journey was my baby daughter, Valerie, our former neighbours and Betty Philpott, whose husband was from White Bay. (Our husbands had already set sale.) My WRNS (Women's Royal Naval Service) friend, Kathleen, was home on leave and came to say a sad farewell in Leeds City Station.

On arrival in Liverpool, we were first taken to a reception centre and then taken on board SS Scythia by a WVS (Women's Voluntary Service) lady. Unfortunately, I must have been the last to arrive in the cabin because everyone else had two bunks (one for mother, one for baby) but I had only one, which caused great problems. I had also been given the wrong printed instructions, stating that prams would be in the cabin. I had therefore put things I needed on the journey (including baby food) in the pram, which was immediately put in the hold of the ship! I was so tired and upset, and Valerie was screaming, so I just sat down on my bunk and wept.

Betty looked sadly on, but there was nothing she could do to help. She did not have any children at that time, so she was on a lower deck. Our instructions said, "Do not change your baby's food," and that was exactly what I had to do, as the National Dried Milk was in the pram and the only baby food available on the ship was Cow & Gate. The next day I was taken down into the bowels of the ship to retrieve what I needed from the pram. (Incidentally, the cabin was already full without any prams.)

Before long I was feeling violently seasick and had great difficulty coping with a young baby.

During the early part of the trip, I received a cable to say that my sister had given birth to a baby boy the day after I sailed, and to their great surprise, I was able to send an acknowledgment. It was rather nice that Mum and Dad had so little time to miss their baby granddaughter before their grandson was born.

After nine miserable days, we arrived in Halifax, Nova Scotia. I cannot remember much about the place, except the weather was wet and miserable. I think we must have been taken almost immediately to the smaller boat, which was to take us to St. John's. The two-day crossing was terribly rough, and there was a heart-rending report in the press about the poor English wives having to endure such atrocious weather.

Arriving in St. John's, my husband Lloyd was one of the first aboard, accompanied by a voluntary worker who whisked us ashore so quickly that we failed to fill in the necessary papers and had to go back the next day! We were then taken to a brand-new hospital which had been especially opened to receive the war brides, and everything was done to make us welcome.

However, accommodation was not available for husbands. Because of this, many of the wives left after a couple of days, and eventually I was the only one remaining, so Lloyd was allowed to join me.

After almost a week we caught the train for Lewisporte - about 300 miles away - and stayed in the only hotel in the place, at government expense! It was then I met the first of my husband's family - his sister Gwen, her husband, and sons Kevin and Don Manuel. After a couple of days in the hotel, we were getting restless and anxious to get to Exploits, so we sent a message: "Come and get us, supposing it's on a raft." It being the spring of the year, part of the ocean was still frozen.

In those days, there were virtually no proper roads in Newfoundland, so the first part of our hazardous journey was by truck over a snow-covered dirt track. Every so often the men had to get out and cut branches from trees to put under the wheels, which kept spinning around. Eventually we arrived at Salt Pond, where we stayed overnight with an elderly couple.

As part of the journey over the ice was by komatik, we had to be very warmly clad - wearing two of almost everything, plus sunglasses! Our sled was drawn by five or six dogs, with the mailmen as runners. In places the ice was tissue-paper thin, and the gaff used to go right down through. After four hours with nothing to see but ice, we arrived at Swan Island, where my father-in-law and three of Lloyd's brothers were waiting for us. We rested for a while in the only house on the island, had a meal of Boston baked beans with homemade bread and mugs of tea. We then trudged through the snow across the island to a place where the ice had melted, and got into three small rowing boats for our journey through the drift ice to the Island of Exploits. One-and-a-half hours later, we arrived at the back of the island, as the harbour was still frozen over, and we had to scramble over rocks to get ashore. We were taken into the first house in the Lower Harbour and were given tea and cakes. The lady of the house was so excited she forgot to give us any milk for our tea. (At the age of 95, when we visited her in hospital in 1993, she still remembered about our arrival and the milk.)

The final part of our journey was by horse-drawn sledge, which took us over the hill to Upper Harbour, our new home. As we reached the crest of the hill, a volley of rifle shots was fired to honour the returning "hero." This frightened the horse, which reared up and would have gone over the cliff had it not been for the restraining hands of my brother-in-law.

Next I met my mother-in-law and the rest of the family, who treated me like a heroine for having travelled in a way "even a girl born and bred on the island would have hesitated to travel."

We lived in Exploits for almost two years. As there was no way of earning a living there, we returned to the UK, moving to my present home in Bridlington on the Eat Coast in 1979 to be near our daughter, Valerie. Sadly, my dear husband died in 1995. We had been married 51 years.

This story was written by Jean in 2007. She is now 89 and still living in England. The story and photos were submitted to Downhome by Jean's niece, Margaret Gulliford of Clarenville, Newfoundland.