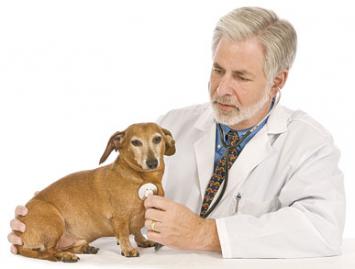 The Canadian Veterinary Medical Association celebrates Animal Health Week from October 5 to 12 - an entire week devoted to promoting animal health and responsible animal ownership. Veterinarians spend all year making recommendations about animal health, but during this specific week we really focus on getting the word out.

This year's theme is "Big or Small, We Help Them All!" Throughout Animal Health Week, veterinary clinics across Canada will be hosting open houses, photo contests, clinic tours and more. Veterinarians will also be visiting schools or youth groups during the week to discuss the responsibility of owning a pet, or veterinary medicine as a career. (See the Web site http://canadianveterinarians.net for more information.)

For instance on October 5th, St. John's Veterinary Hospital will have an open house, allowing people a chance to gown and glove for surgery, meet some parasites up close, explore the fascinating world of radiology, attend a "Clicker Training" workshop and so much more!

While the majority of pet owners visit the vet for annual examinations and vaccinations, many people underestimate just how important this annual checkup is. This is your opportunity to get an update on your animal's health, keep on top of ongoing issues, and get informed about newly emerging diseases and new treatment protocols. It also allows you to establish a personal relationship with your veterinarian, who is more likely to pick up on abnormalities with your pet if they become familiar with its habits.

An annual visit should start with a discussion about your animal's clinical history, diet, activities, and concerns you may have. Don't be shy about sharing this information - no matter how trivial or weird it may seem. It could indicate something about your pet's health that we wouldn't know about unless you told us.

The physical exam - from top to bottom
During the physical exam, I start at the top and work my way down (every vet has a system to make sure the animal is evaluated completely). Teeth are looked at for dental disease, and at the same time we note your pet's gum colour (this can be an important clue for anemia or low blood pressure); then the eyes, nose and ears are checked. Just under the jaw line is the first set of lymph nodes; these are palpated to check for pain or enlargement (an important clue for infection or sometimes cancer). Just in front of the shoulder blades is another set of lymph nodes that are difficult to find unless they are enlarged.

Once the top is finished it's on to the middle section where all vital organs are located. A stethoscope is used to listen to the lungs and heart. Did you know that most heart murmurs and arrhythmias detected in animals show no external evidence of heart disease?

Next up is the abdomen; in most cases the edges of the liver, spleen, kidneys, intestines, colon and bladder can be palpated and evaluated for size and consistency. The groin area houses another set of lymph nodes and from the inside of the leg, the femoral pulse can be palpated for strength and rhythm. Finally we reach the business end - genitals are inspected (this is especially important in pets that are intact), the anus is examined, a rectal temperature is taken and the lymph nodes behind the knees are palpated. If your pet is a senior citizen, or is ill for any reason, this examination should be complemented blood work and/or radiographs.

Once the physical exam is finished, it is time to determine what vaccinations your pet needs, and how often. While vets have our core vaccination recommendations it is not a one-size-fits-all system. Alterations are made based on your pet's social calendar, what pets you have in the home, where you live, and your concerns about vaccinations and potential side effects.

Animal Health Week is our opportunity to educate pet owners on pressing animal health issues such as dental health, obesity, and transmissible diseases like parvo. This potentially fatal infection is Number One on our radar, mainly because it can be cured if treated early enough, and is preventable. Parvo is caused by the canine parvovirus, which may be transmitted through contact with contaminated feces. The virus can survive up to two years - long after the actual fecal material has broken down.

Once ingested (generally from self grooming after a walk), the virus attacks the lining of the small intestine, causing those cells to die and slough. The hallmark of infection is vomiting and very bloody diarrhea accompanied by lethargy, anorexia and severe abdominal pain. In as little as 24 to 48 hours an affected dog can develop severe dehydration, malnutrition, and septicemia, leading to death shortly thereafter. Once diagnosed, days of hospitalization, intensive care and antibiotics are required if there is any hope of recovery.

Fortunately, parvo can be prevented by a vaccination that is 99.9 per cent effective.