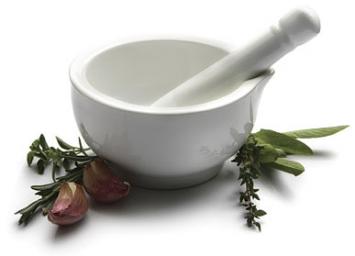 Before the advent of modern medicine, people turned to their kitchen cupboards and the great outdoors to find cures for common ailments. While many of these "cures" remain today only as memories, some people still swear by these pieces of folk wisdom. Readers have shared their families' traditional remedies with Downhome over the years - and now we'd like to pass them on to you and yours. While these remedies may seem harmless, many do contain medicinal properties and can cause side effects. Thus, anyone interested in trying these remedies should first consult a family physician or homeopathic specialist.

Tea brewed from the bark or leaves of the witch hazel tree (also known as the spotted alder and the yellow birch), when applied as a poultice, is believed to speed the healing of burns and soothe skin that's come in contact with stinger nettles. A remedy for sunburn involves pouring milk (at slightly less than room temperature) onto gauze and applying it directly to the affected area. To heal cracked or chafed skin, collect turpentine from pine trees and apply to affected area for rapid healing.

A mustard plaster applied to the chest is believed to do the trick. Powdered mustard is mixed with warm water to form a paste that is spread on a piece of flannel material, applied to the individual's chest and held in place with a cloth binding wrapped around the chest and back.

Rinsing the mouth with vinegar is believed to relieve the pain from a toothache.

Home remedies for warts abound in Newfoundland and Labrador, ranging from the natural (moisten a strip of birch bark and tape it, inner side down, over the wart) to the apparently supernatural (use chalk to make a mark on top of the stove; as the mark burns away, the wart disappears).

Feverfew, a weed common in this province, has long been touted for its medicinal properties. To ease a headache, brew a tea made from two to three tablespoons of dried feverfew in a cup of hot water. Strain, and drink up!

Steep two teaspoons of elderflower in one cup of water for 15 to 20 minutes. Strain and drink three times a day until the fever breaks.

To calm a stomach ailment, people in this province traditionally turned to the trees for relief. Teas made from boiling juniper bark, alder buds and dogberries were commonly believed to cure stomach problems.

Three drops of garlic oil and two drops of mullein oil poured into the affected ear three or four times a day is said to relieve painful earaches.

To help you perk up, add barley or wheat grass to a salad. Both contain a high amount of natural chlorophyll and have the ability to concentrate nutrients from the soil.

This cure is truly a case of "desperate times call for desperate measures!" Place a jellyfish in a container and allow it to dissolve into liquid. Rub the liquid in the affected area for relief.

To soothe the sting and itch of a mosquito bite, dab a drop of white vinegar into the area, or rub with a slice of lemon. For bee stings, however, mud is the treatment of choice!