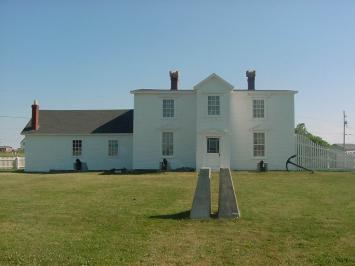 The Mockbeggar residence. Don Johnson photo.
You'll be taking a step back in time with a visit to Bonavista's Mockbeggar Plantation, the former home of Newfoundland politician F. Gordon Bradley. Bradley played an instrumental role in Newfoundland's Confederation with Canada and went on to become the province's first representative in the Canadian cabinet. The Mockbeggar site, which Bradley occupied from 1939 until 1966, consists of a main residence as well as four outbuildings: a cabinet-maker's shop, a barter shop, a cod liver oil factory and the property's oldest structure, an architecturally impressive fish store built in the 1700s - affectionately known as the "big store." From May to October, visitors may tour the main residence, which has been restored to its 1939 charm and reflects the time when Bradley lived there. Friendly interpreters dressed in period clothes will answer any questions you have while you explore this historic home, built in the late-19th century.