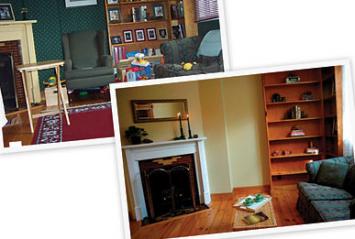 Before and after staging a home
Leslie McNab

My dream home has been keeping me up nights. A "handyman's special," I bought it for peanuts in 2002 and spent two years up to my eyebrows in renovations. The result is a country cottage with a dash of ski chalet: an open-concept main floor featuring a wood stove in one corner, and an upstairs loft with two bedrooms. Set on a property surrounded by green space, a stone's throw from walking trails, it's an idyllic private retreat just a 10-minute drive from downtown St. John's.

Sounds perfect, right? Trouble is, my dreams have changed and it's time to move on. With the buzz about the red-hot real estate market and big oil investing even more in the province, I now dream of reaping a tidy sum (once I give the bankers their due) on the sale - a nest egg to start fresh with.

But how do I highlight the character and downplay the flaws of my house to get top value when I sell?

Enter Kristen Sweetland, an Accredited Staging Professional (ASP). If you watch TV shows like "Sell this House" you know exactly what that means. An ASP is someone trained to "stage" a home - that is, prepare it to be viewed in such a way that potential buyers can imagine themselves (more importantly, not you) living in the space.
"The way you live in your home and how you sell your house are two different things," explains Kristin. "The goal with home staging is to remove the personal elements - to 'neutralize' the space - and present your house as a product on the market," she says.

Home stagers (many of whom are also decorators or real estate agents) claim their professional services can help anyone get a premium price for their home. Why? Because they specialize in understanding what motivates potential buyers. Just as a retail store designer knows how to position racks and shelves to give products maximum appeal, so an ASP knows how to merchandise your property to help it sell faster and for more money.

A 2007 survey (by StagedHomes.com) of more than 400 homes across Canada and the U.S. found that 93 per cent of those prepared for sale by an ASP sold, on average, in one month or less. Another survey that same year, of more than 2,000 real estate agents in the U.S. (by HomeGain.com), found that home staging tactics including de-cluttering and stowing personal items, brightening rooms (with paint and lamps), and landscaping gave returns on investment upward of 500 per cent.

"One of my first clients, when I started staging homes back in 2003, was thrilled with the difference in her space after she implemented my suggestions - even more so when her house sold for $6,000 more than the asking price," Kristen says.

Kristen visited my home for an initial consultation, which took about an hour. Walking room to room, she made copious notes and took photographs from every angle. She even did the same around the exterior. A few days later she returned with a detailed home staging report, complete with itemized to-do lists for each room and must-do "Top 5" tasks to complete before I listed the house for sale.

Many of her suggestions made sense and were simple enough to implement. Things like packing away knickknacks (the rule is one per table, and NOTHING on windowsills) and family photos, clearing off the kitchen counters and tidying closets and cupboards so they look organized and functional. But the first two items on my Top 5 involved a bathroom renovation.

"You've done great work in the rest of your space, but the bathroom feels forgotten and uninviting," read my home staging report. "This is a major job that will turn off most potential buyers." In other words, if I want to make a premium on my house I will finally have to invest in that long-postponed bathroom renovation.

Home staging report in hand, I now have a tangible plan for readying my home for sale. If I get started right away and all goes as planned, it should be ready by next spring!