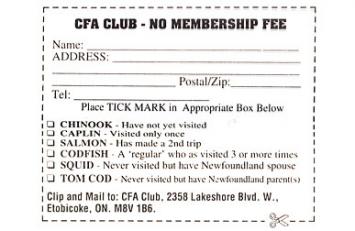 In September 1994, Ron Young, founding editor of Downhome, and Mel D'Souza, Downhome's artist, announced they were launching a Newfoundland and Labrador club. But there was a catch: Membership would be made up of non-Newfoundlanders. They called it the "CFA (Come From Away) Club," and it was meant to be a society of friends of the province. Mel wrote, "Membership is open to non-Newfoundlanders worldwide who have either visited Newfoundland, plan to visit the Rock, or just have an interest in Newfoundland." Before long, hundreds of members had signed up and each was given a status in the club based, of course, on their relationship to Newfoundland and Labrador. A "Chinook" was someone who'd never visited the province; a "caplin" had visited only once, while a "salmon" had made a second trip and a "codfish" was a regular who'd visited three or more times. A person whose spouse was their only tie to Newfoundland and Labrador was known as a "squid;" and a "tom cod," appropriately, was the offspring of native Newfoundlanders and Labradorians. The club's main objective was for members to promote the province in their own provinces, states or countries - which they did for nearly decade, until the club was disbanded in 2003.

Are you a former member of the CFA Club? If so, leave a comment (below, right) and share your memories with us.

I guess I am a Squid although i also lived in NL for 2 years. My husband is a Tom Cod. We were not former members, as we just learned about it through Downhome.