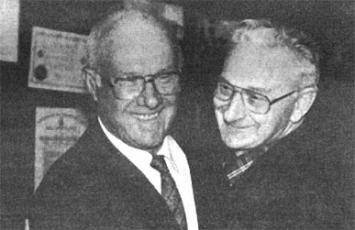 The following story appeared in the September 1994 issue of the
Downhomer.

On June 25, several railway men and their wives, as well as reporters, photographers and politicians, gathered at the Royal Canadian Legion Hall (Caribou Room) in Clarenville, Newfoundland, to honour and present an award for bravery to Canadian National Railway's Engineman Melvin Ivany (retired). He was honoured for the part he played in risking his own life to save a fellow trainman from drowning at Gambo River Railway Bridge on July 6, 1970.

On that fateful day, regular scheduled Freight Train No. 51 was passing over Gambo River railway bridge en route to Bishop's Falls when the train's conductor, Eric Pack, slipped on the rear platform of the caboose and was catapulted into Gambo River.

On this particular day - and as luck would have it - the train was short in length and engineman Melvin Ivany saw conductor Pack fall into the river. The rear-end trainman notified Ivany by the train's radio that the conductor was being carried out to sea by the fast-flowing current.

After the train came to a complete stop, engineman Ivany ran to the scene of the accident. He quickly assessed the situation, and because Pack was a non-swimmer and there was no rescue equipment readily available, he decided the only way to save the conductor was to go into the river himself to try and rescue him.

Owing to the cold temperature of the river, which was flowing from the high country, and the strong current, Ivany quickly became exhausted. For his own safety, he would have to make it to the shoreline and forego any rescue attempt to save Pack from drowning.

However, some inner strength prevailed, and he decided to make one last valiant attempt to try and swim to the conductor, who had by this time submerged for the third time.

Ivany swam to the spot where he last saw Pack and was lucky to spot him on the river bottom through the murky water. He dove down, grabbed him and brought him to the surface, and finally to the safety of the shoreline.

Meanwhile, other members of the train crew had arrived to assist. They applied artificial respiration and conductor Pack began to breathe again.

Pack was then rushed by ambulance to the James Peyton Memorial Hospital at Gander, where he remained for a few days to undergo treatment for his ordeal.

Back in 1988, when the writer was researching some human-interest stories for one of his books on the Newfoundland railway, someone suggested a story be done on Melvin Ivany and his heroic deed. When the full details of the incident were obtained, this writer felt that Melvin Ivany deserved more than just a short story in a book. He deserved some long overdue recognition.
With this thought in mind, the writer fought for several years to have Melvin Ivany recognized for the part he played so many years ago in saving the life of his co-worker.

On June 25, 1994 - nearly 24 years after the near-tragedy - Melvin Ivany received his just awards. The award for bravery was presented to Ivany by the writer (also a railway man) on behalf of the United Transportation Union, Cleveland, Ohio, USA. Rear Admiral Fred Mifflin, MP Bonavista-Trinity-Conception, flew in from Ottawa to be the guest speaker for the occasion, and he presented Mr. Ivany with a certificate on behalf of his office and the Government of Canada for his act of heroism. Mrs. Caroline (Kay) Young, MHA, district of Terra Nova, also spoke at length on the life-saving incident at Gambo River. She presented Mr. Ivany with a plaque for heroism on behalf of her office and the Government of Newfoundland.

It was a most enjoyable event, and at times a little emotional, more especially when Eric Pack hugged Melvin for saving his life so many years ago.