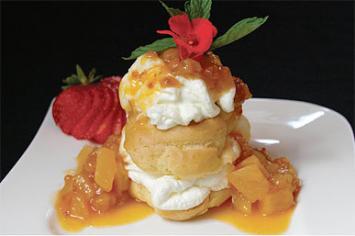 An accepted culinary norm is that "what grows together, goes together." Things grown in a single area that come into season at the same time tend to work well together in a dish. Many have become classics - like tomatoes and basil, strawberries and rhubarb, peas and mint.

There are, however, times when flavours that are seasons and miles (even continents) apart combine beautifully. One such match is our Newfoundland bakeapples paired with tropical fruits such as pineapples and mangoes.

Newfoundlanders often find themselves trying to explain the unique flavour of bakeapples to people who have never tried them: apricots with honey, floral and earthy, musky tart-sweet. The nature of the berries makes bakeapples a perfect fit for shellfish such as lobster, scallops, snow crab or coldwater shrimp - all of them native to Newfoundland and more proof of the "grow-together-go-together" rule.

Another popular way to cook bakeapples is with a little sugar to make a simple jam or topping for ice cream and cheesecake. Our recipe below combines bakeapples with tropical fruit in a heavenly sauce that we like to use as a topping for cream puffs. The aromatic floral qualities of the pineapple and mango match perfectly with similar flavours in the bakeapples.

In a medium saucepan, simmer 1 cup bakeapples with 1 diced mango, 1 cup chopped fresh pineapple and 1/2 cup sugar until fruit is softened and the mixture is thickened. Taste and adjust flavour to your liking by adding lemon juice if too sweet, or more sugar if too tart. Set aside mixture to cool. (Note: topping can be made a day or two ahead and stored in a jar in the fridge.)

To make pastry puffs, boil 1 cup water with 1/2 cup butter in a medium saucepan. When butter has melted, add (all at once) 1 cup of all-purpose flour. Stir with wooden spoon until the mixture leaves the sides of the pan, coming together in a ball. Remove from heat. Transfer to a mixing bowl and beat in 4 eggs, one at a time, until incorporated. The dough will be a bit sticky but will hold together. Drop dough onto parchment-paper lined (or well-greased) baking pans in 8 mounds, about 3 inches around and 1 1/2 inches high; leave 2-3 inches between puffs. Bake in a 375° oven for about 25 minutes until golden, firm and hollow-looking. Remove from oven; poke a hole near the bottom of each puff and return to the oven for another 5 minutes to dry out. Remove from oven and cool puffs on a rack. (Note: puffs can be made a day or two ahead and stored in an airtight container.)

Make whipped cream filling by whipping 1 cup 35% cream with 2-3 tbsp sugar until firm peaks form. (Alternatively, use Cool Whip or a ready-made whipped cream from a can.) Just before serving, cut pastry puffs in half laterally. Fill bottom half with whipped cream and replace top. Spoon bakeapple sauce over top, and serve with a little more cream on the side. Garnish with a slice of pineapple, mango or a sprig of fresh mint.

Bakeapple Trivia
Did you know that bakeapples are a relative of the Rosaceae family, as are blackberries and raspberries? Bakeapple plants are male or female. Unlike other berries, they do not self-pollinate; plants of both sexes are required to produce fruit!

Ever wonder where bakeapples got their name? One theory states that an early French explorer asked, "What is this berry called?" or "B'en qu'appelle?" and the phonetic version of the name stuck. Called "cloudberries" in Scandinavia and Europe, bakeapples are so prized in these places that entrepreneurial residents are looking into ways to cultivate them to meet market demand.

Andrea Maunder and Mike Barsky are the dynamic duo behind Bacalao, a St. John's restaurant specializing in "nouvelle Newfoundland" cuisine. Visit www.bacalaocuisine.ca to see their dining concept and menus.

I really like your blog and i really appreciate the excellent quality content you are posting here for free for your online readers. thanks peace sandro

I loved the fresh bakeapples when we were in NFLD last summer. It is good to see other ideas for them. We brought some frozen ones home with us and have jealousy guarded them.I had cloudberry jam as a child when my Dad would get them from Sweden. As usual, the fresh ones taste so much better. Do you know if any one has had success growing bakeapples in northern Minnesota. The land here is quite boggy in places.