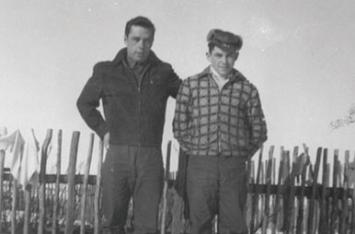 Back in the late 1940s and '50s in Newfoundland and Labrador, we had really hard winters of frost and snow. In the Little Bay area of Marystown, 1946 was one of those cold winters. The harbour was frozen over and my brother Pete, who was the oldest member of our group, wanted to go riding.

He got the horse slide and tied a brin bag to the front handles of the slide, as there was a breeze of wind. Then Pete, my sister Elizabeth and I went up Murphy's Hill, which was very steep. When we reached the top of the hill, my sister and I got on board; my brother was on the back, steering the slide as we raced down the hill. The wind had increased and the brin bag was making the slide go faster - so fast that we couldn't stop at the foot of the hill and we went out on the harbour ice.

We travelled over the ice very swiftly, out towards open water. My sister and I didn't realize the danger we were in, as we were sitting backwards facing Pete, who certainly did know. He was trying to slow down the sleigh and, by the grace of God, he did manage to stop the slide a few yards from open water.

My sister and I understood the situation when Pete got out and turned the slide around so we were facing the open water. He then began crawling with one hand on the outer edge of the ice, where it wasn't so thick, and the other hand on the horn of the slide, pushing us backwards over the ice against the wind.

By this time, a crowd of onlookers had gathered on shore, but there was nothing they could do until we got abreast of them. About halfway to safety, I lost my cap and wanted to go back for it (the mind of a five-year-old). We finally neared the onlookers and my cousin, Doug Murphy, tried to reach for us, but it was too dangerous to hop the ice clampers (broken ice). At last they rescued us by pushing a dory out to the thick ice between the clampers, getting us all on board safely, and using the strength of the men to haul the dory back to shore.

This is a testament to my brother's strength and courage in the face of danger. The last thing I remember was sitting on my mom's knee by the woodstove in her rocking chair. I looked up to my brother; I thought he was cool, as the young folks would say now. My brother has passed away, but this will be in my memory forever.