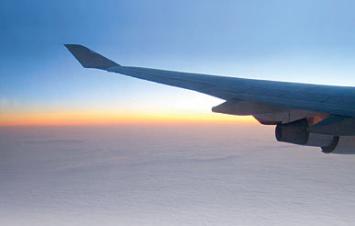 It's not that it's a really long drive to the Gander airport from where we live, but at 3:00 in the morning no one is in a great mood. Certainly neither of us is admitting to anything, but someone forgot to get the travel mugs ready for this morning and a certain pair of work gloves are also on the missing list. Hopefully there's gas in the car because nothing is open this time of the morning. And why are we only discussing this now? In less than two hours we will have to say goodbye again until the next "turn around."

Yep, that's what they call it - a turn around. As if, just by chance, you could complete a full revolution of the body and be back at square one in a matter of moments. Not so. A turn around for us is 20 days and, depending on weather and flights, it could be longer than that.

Not knowing what to say, most people comment that we should be grateful for this time apart. And I'm sure it would do some couples good, but not us. We're newlyweds, and newly separated, too - well, for the majority of the month anyhow. Spending only seven days at home for an entire month isn't much and it gets even shorter when one of those days is used for flying home and the other for flying back out.

We sure do manage to squeeze a lot into those days in between, forced to do a month's worth of living in five or six days. All the missed breakfasts, lunches and dinners have to be made up for somehow, so all the favourites are concocted for a week straight. Three weeks worth of missed laughs and local gossip have to be crammed in, along with all the crazy and obnoxious stunts the dog did, not to mention the unmentionables.

I tell my husband that he must feel famous for all the time he spends on planes travelling back and forth across the country. But that's where the glamour of it ends, I suppose, just with the thought of it. All those days of travel have a way of wearing on you when you're going somewhere you don't really want to be. Your body is backing out the driveway in the dark, most likely just in time to catch that 5 a.m. flight, while your heart is back in the windowsill, where you caught a glimpse of the dog looking out the window at you.

I realize that everyone likes to put their own spin on the story of our outmigration and the camp life migrant Newfoundlanders are living: people who have never been there are constantly telling me what it's like, especially all the money that's being made. I do, however, know what it feels like to walk back into your assigned room after a 10- or 12-hour shift with only a bed and little table to greet you, and it doesn't feel like home. There's just enough time to grab a shower, put on fresh clothes, get to the cafeteria and call "home."

Speaking of the cafeteria, my husband has made a few buddies, whom he eats with during lunch. These men all live in different camps, and are offered different foods in their cafeterias each day. My husband often tells me of the great lunch he had because one of the boys picked him up a chicken burger from last night's leftovers. Or someone else had a great pick on snacks so grabbed enough for everyone. It's a major part of their day - eating. It's what you do while you aren't working.

During these mealtime breaks they converse back and forth about each other's lives and families...well, mostly they just make fun of each other. But from what I can gather they've all made a choice to take work where the jobs are, that pay well. Many young men whose aim it is to gain hours in their apprenticeship, eventually leading them to journeyman status, go west to gain an education and work experience. Young men with new families, just starting out, leave their wives and children behind with a goal to save money to purchase a home, at home. Some of those with well-established families and homes sacrifice sleeping there for weeks at a time to put their children through college and university - to give them opportunities. Others leave after they have already entered into retirement, realizing that the money isn't enough so they work for a few years to bump up their savings.

Anyone who travels for work has their own set of reasons why they choose this life. And some will tell you it really isn't a choice at all. Where there is work and opportunity they will go - they have to, considering the alternative.

I realize my husband has been away for far too long when I catch him saying "Where did the time go? I've gotta get packing, goin' home tomorrow." Home? Did he just say home? A slip of the tongue, I'm sure. An Alberta camp can't feel like home...can it? Perhaps when you're spending three-quarters of your time there, maybe even an Alberta camp can start to boast it's pleasantries...Naw - the money's just good.

Well written article with a wee bit of humor.