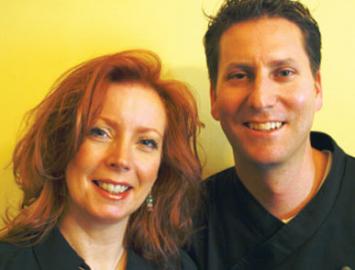 When the couple returned to Canada they commenced a long-distance relationship punctuated by visits back and forth. Mike was chef at the renowned Ottawa eatery, Von's Bistro, at the time. After his first-ever trip to see Andrea he discovered he'd not only fallen in love with a Newfoundlander, but with Newfoundland as well.

Meanwhile on her visits to Ottawa, Andrea would brainstorm with Mike to design new items for the bistro's menu. She suggested that he try dishes made with salt codfish, which led to the creation of "bacalao fritters" - a dish that soon became popular at Von's. Shaped like a football, the fritters are made with salt fish, potato, garlic, lemon and Newfoundland savoury, then dipped in panko (Japanese bread crumbs) and fried. Von's Bistro served the fritters with aioli dipping sauce, which contains garlic, green peppers, lemon and mayonnaise.

Then the opportunity to buy Von's Bistro came up. Mike and Andrea considered making an offer on the business, but they both realized that they actually wanted to live and work in Newfoundland. So in December 2006 they moved together to St. John's and started looking for a place to set up shop.

They spent the next five months trying to find a space with the right atmosphere in a good location; finally in May 2007 they found an old house at 65 Lemarchant Road. After a few months of preparation and renovation they opened Bacalao (the Spanish word for salt cod) in September 2007, and haven't looked back since.

Why am I telling you all this? Because starting with this issue, Mike and Andrea will be lending their creative culinary genius to Downhome as the magazine's "Everyday Gourmet" columnists. We thought it fitting to introduce them this month, on the eve of Bacalao's one-year anniversary.

What do Mike and Andrea mean by "nouvelle Newfoundland" cuisine? In a nutshell, it's a focus on fresh, local ingredients and classic recipes made with a unique twist. So the food at Bacalao would be familiar to many Newfoundlanders, but different at the same time. For example, the salad menu features crispy cod tongues served on a bed of greens with cucumbers and sweet onions and creamy lemon-caper vinaigrette. There is also a blueberry-peppercorn caribou steak salad (it even SOUNDS delicious). A pasta dish made with penne and sausage features chili moose sausages tossed with peppers, mushrooms and onions in a spicy tomato sauce, then topped with shaved pecorino romano cheese and toasted pine nuts.

Those famous "bacalao fritters" from Mike's Ottawa days have made their reappearance on the Bacalao lunch menu, which also offers brie and partridgeberry phyllo cigars (brie cheese and homemade partridgeberry chutney rolled in phyllo pastry and baked crisp, until the brie is warm and melting), and snow crab spring rolls - glass noodles, julienned vegetables, ginger, garlic and Newfoundland snow crab in crispy spring rolls, served with a mignonette sauce of bakeapple wine, rice vinegar and chiles.

Bacalao's suppliers include the organic farm in Portugal Cove and the lettuce farm on Hamilton Avenue in St. John's; meats (including some of my favourites - lamb, moose and caribou) and fish are sourced locally, too. The dinner menu pays homage to these delicious, traditional ingredients with items like bacalao du jour (the daily dish made with salt cod) and crispy skin chicken breast, which is served golden brown with a Newfoundland savoury jus, sour cream and chive mashed potatoes, buttered vegetables and homemade partridgeberry chutney. Other delicious choices include Atlantic salmon in gin and juniper berry sauce, caribou medallion in partridgeberry sauce, and mussels served with fries.