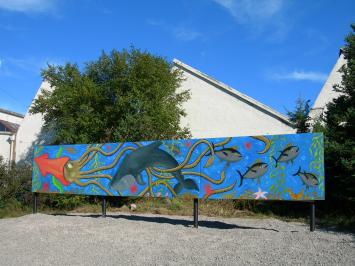 A mural depicting underwater life (including the Giant Squid) created by young artists for display in Holyrood Harbour in 2005.
In the August issue of Downhome, Dennis Flynn explores the history and the nature of the giant squid, a mythical creature that's been turning up in the waters surrounding Newfoundland and Labrador for at least three centuries. Here are some more quirky facts concerning these creatures.

Giant Squid in Literature
In the realm of fiction, Herman Melville mentions a giant squid in the classic Moby Dick; Peter Benchley (author of Jaws) has one as the title character in The Beast; Newfoundland-born poet E.J. Pratt includes one in his narrative poem, "The Cachalot"; and Newfoundland author Kenneth J. Harvey includes a giant squid in The Town that Forgot how to Breathe.

The "Idol" Connection
In 2005, a group of young artists involved in a Community Arts Program produced an excellent stylized mural depicting an underwater life scene in Holyrood Harbour (located at the intersection of highway routes 60 and 62). Prominent among the characters is a giant squid encountering a whale, and the tuna fish for which the area was once very well known. One of the project's artists was singer Lindsay Barr, a 2008 contestant on CTV's "Canadian Idol."
MORE ARTICLES
load more