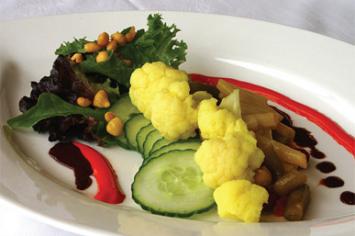 August is the height of summer - our chance to make the most of our salad days before the season changes and we're left with a long winter of eating expensive fruits and veggies trucked in from parts south.

Shakespeare coined the term "salad days" in his play Antony and Cleopatra, circa 1606. At the end of Act One, when Cleopatra speaks regretfully of her youthful flirtation with Julius Caesar, she describes that time as "My salad days, when I was green in judgment, cold in blood." The word "green" describes her inexperience and immaturity, and salad by association refers to leafy green plants that are edible when young and tender. It makes a juicy metaphor that is still a favourite of popular culture, although the modern expression usually means a person's heyday - when they're at their physical or mental peak.

With local greens at their peak this month, it's important to mix things up in the salad bowl so they don't become old in spite of their delicious freshness.

Variety is the spice of life, and greens are so versatile they can be enjoyed all throughout August without repeating the same flavour. Here is one of my favourite salad recipes to try: a blend of baby greens and beans dressed with the spicy tang of India.

Blend yogurt, mayonnaise, tandoori spice, lemon juice and garlic together in a bowl until smooth. Refrigerate until ready to use.

Drain and rinse all the beans and combine in a large bowl. In a separate bowl, stir together vegetable oil, vinegar, sugar, salt, pepper, dry mustard, and celery seed. Blend together with bean mix and let stand for at least an hour (preferably overnight). Before serving, add chopped onion and green pepper; season to taste. Stir in 1 cup of tandoori dressing, then toss bean mix in a large salad bowl with greens.