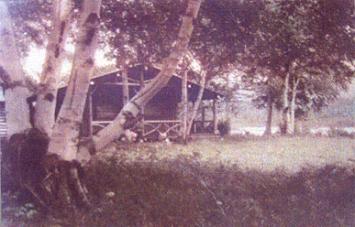 There existed across the Humber River, not far from Corner Brook, a wonderful, idyllic cabin known to all the family as "Uncle Norman's Cabin."

To get there was no small feat, as it was on the opposite side of the river. So with one small boat, my uncle would get everyone safely over (all eight of us cousins) and then retrieve the supplies for the holiday. So many trips later, and in the dark with only a flashlight, he would complete his mission. My aunt would accompany him and her job was to watch for dead heads (sunken logs) that could wreck the motor.

The cabin sat beside the river, backed by a large hayfield and surrounded by trees, including a gigantic apple tree. We believed that to be somewhat sacred, as we were forbidden to touch the apples. However, when no adults were watching...who'd miss a few?

A stone's throw from the cabin was a small, magnificent, white sandy beach to rival any in Hawaii - as far as we were concerned, anyway. We spent hours building sand castles, bridges and roads while our parents sat and enjoyed the warm sun and kept careful watch "over their flock."

Every few days, a couple of us older cousins and my uncle boarded the boat and headed down the river at top speed (7 H.P.) to the dairy farm where we obtained our milk and butter supplies. The cabin had no electricity, so those and other perishables were kept on ice obtained from a shed containing large blocks of river ice insulated by sawdust.

There was never a shortage of things to keep us amused at the cabin. On a clear night, we all sat outside on the steps in the dark and shone flashlights on the dozens of bats flying among the trees overhead. When the weather was inclement, we sat around the fireplace and in the light of the lamp we sang or played our favourite game, "I Spy With My Little Eye."

A couple of my cousins were obsessed (and still are!) with fishing and spent many hours on the wharf or in the boat catching mouth-watering trout.

How we loved haying time! The hay was cut with scythes and piled up in large mountains, and playing and climbing on them kept us entertained for days. (Those poor guys who stacked that hay!)

I never did meet the legendary Uncle Norman, but I often wonder if he ever knew what a memorable saga his old log cabin created for all of us. Here is the only known picture of Uncle Norman's cabin, which was taken down years ago.