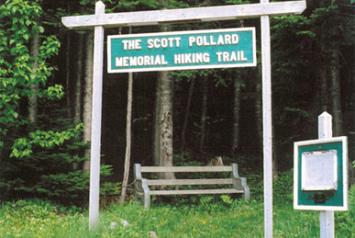 The author wonders, is this the former Trapper Joe's Hiking Trail?
By Lin Crosbie-Marshall

As I was about to pass Long Gull Pond on my way from Corner Brook for a day's jaunt to Stephenville, I remembered a mention of Trapper Joe's Hiking Trail in last year's provincial travel guide. If memory served correct, the hike only took 20-30 minutes and was rewarded by a view of Bay St. George, Long Gull Pond and the Lewis Hills.

On impulse, I pulled off the road and asked directions from one of the local cottagers, an old bachelor. His words, not mine. When I complimented him on his garden, he replied, "Not bad for an old bachelor, huh?" He informed me that there was a trail right next to the Indian Head Rod and Gun Club, and pointed towards a high mountain.

I hesitated and said, "That looks like a challenging vertical climb."

"No," he assured me. "There are some flat stretches and although I haven't climbed it for quite some time, I know it only takes about 30 minutes."

Reassured, I followed his directions and parked by a sign indicating that I had arrived at the beginning of the Scott Pollard Memorial Hiking Trail. "Hmm," I muttered to myself, "They must have changed the name." I didn't know who Scott Pollard was, but he must have been very special because a smaller, more detailed sign, left the impression that this trail had been carved out to honour the memory of someone who had been much loved.

Thinking that 30 minutes was no big deal, off I went. At first, I was charmed by the many wild violets along the trail. But as I huffed and puffed upwards, passing a fallen sign informing me "You have come 1,155 ft. Next rest stop 420 ft.," I was beginning to have second thoughts. "Where are these flat stretches, old bachelor, and where are the rest stops, and does this trail never end?" were questions that sprung to mind.

Heart pumping and legs aching, I trudged on.

Scott's trail was in a sad state of disrepair and I had to sidestep dried moose droppings to turn over the next sign. "You have come 1,575 ft. Next stop 770 ft." Oh, great. It turns out there are no rest stops and, just as I was about ready to pack it in, I looked up and saw a vast expanse of open sky at the top of the hill. This must be the view I was waiting for. Up I plodded, only to be confronted by a long vista of marsh, with the faint possibility of a lookout in the distance.

Undaunted, I navigated the marsh and received my reward - not the promised view, but a massive clump of pink ladyslippers. Although I vaguely remembered reading somewhere that you're not supposed to remove these little gems from their natural habitat, I plunged my bare hand into the soil and took one up by the roots. My faulty logic was "There's tons of them, who's going to miss just one?"

Retribution was swift. Two steps later, I encountered fresh moose tracks and a load of still-steaming poop. It was time to beat a hasty retreat. After all, I was all alone in wildlife's backyard.

Two more steps and I was thigh-deep in the marsh. One leg out and one leg in, I could feel myself being sucked downwards. Holding my two cameras (I don't trust digitals), my dead cell phone and the ladyslipper in one hand, I tried to extricate my leg with the other. A long moment of sheer terror was followed by grim determination. "Death by bogging" wasn't going on my tombstone.

They say when you think you're going to die, your whole life flashes before your eyes. Well, do I have news for you - it's just the reverse. Your whole death flashes before your eyes. I could envision every inch of my reclamation by the marsh, right down to the last second and the final glimpse of the sky before my head was swallowed whole. That was incentive enough to start tugging. I pulled and pulled - and pulled some more. After ten minutes of super-human exertion, there was a loud whoosh as the bog banshees reluctantly loosened their grip on my leg. I was free!

Oh, the relief - swiftly followed by despair. The banshees had claimed by shoe.

Furious now, I thrust the full length of my arm down into the messy black goop and probed until my fingers found the shoe. Twenty minutes and 30 swear words later, the bog's vicegrip ended and out came my arm, my shoe, and a black spray of slime splattering my face. (So much for the 30-minute hike.) My heart quivering, I cautiously negotiated my way out of the rest of the marsh towards dry land.

With backward glances to insure I wasn't about to be rear-ended by an angry moose, I tackled the descent. Then the flies found me. Their attack was vicious and unrelenting. Perhaps they were attracted by blood oozing from the six-inch scrape on my leg - which until then I hadn't realized I had acquired.

Next came the toads; harmless, but jumping out every ten feet to scare the living daylights out of me. Before a plague of locusts suddenly appeared and descended to round out my penance, I raced to the safe haven of my car, slammed the door shut, drove past the bachelor's house (I almost married him, just to punish him, but didn't want to add bigamy to my crimes) and right to the pond. Fully clothed, I flung myself into Long Gull Pond and emerged with still enough dirt between my toes to plant a row of cabbages. Then, I confess, I stole a cup of water (larceny is in my genes) to keep the roots of my ill-gotten ladyslipper alive.

As I was only five minutes from Stephenville, I had to decide whether to go back to Corner Brook to get cleaned up, or to soldier on. I brazened it out.

Strutting around Stephenville like Lady Muck - which I certainly was - I carried out my business and returned home to plant my purloined ladyslipper.

Scott, when your ladyslipper has recovered from transplant shock, I'm going to dig it up again and return it to you. And I'm going to finish that hike, this time accompanied by a rescue team.

By the way, does anyone know if Scott Pollard's trail was formerly known as Trapper Joe's Trail? If not, where is it? I still have eight more lives.

Scott Pollard was my Uncle by Marriage. Uncle Scott was a cabin owner just down from the walking trail. Unfortunately on a very cold night on the 6th of February 1993 my Uncle perished in his Cabin as it burned to the ground. The walking trail was a place he loved and used to keep it cleared from dirt and debris. After his death the other cabin owners decided to pay tribute to him by naming the trail after him.