The Capelin are In 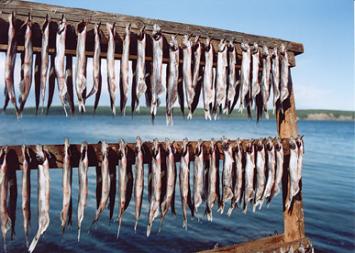 Photos and story by Christina Clouter

I was startled by the sound of my alarm clock radio blaring at 4 a.m, then remembered what my uncle had told my father last night: "The capelin are in."

A weatherman reported from the radio: "Well, folks, a foggy morning for the most part, clearing to sunny skies by noon." This meant a good day for drying the small, silvery fish.

I hopped out of bed, pulled on my clothes and headed for the kitchen. The aroma of toasted homemade bread and melted butter filled the air.

My father stood from the table, taking one last sip of his tea before placing his mug down. Dressed in his usual morning attire of army green nylon and sheep's wool, he was a hardy fisherman - sometimes stout, more times a gentleman.

"You better grab your toast and come on," he said impatiently. "Uncle Terry's waiting in the truck."

Mom looked at me and smiled, already having placed my toast, with a fried egg on top, on the counter. "Have fun," she said, handing it over with a bottle of orange juice.

After about 40 minutes, we arrived at the beach. I gazed across the bay at the fog creeping across the calm water, covering everything except the rolling hilltops in the distance.

"Grab those nets, Sam," my father ordered, jumping out of the truck. "We'll take the fish pans." Along the edge of the flat-pebble beach, the water flickered silver as the capelin rolled in droves. They created a soft, crashing wave that sounded like a burst of hard rain when the pebbles clattered together.

Casting net ready, my father tossed it upon another wave rolling in. He drew his line quickly and dragged his catch ashore. Lifting it, he dumped about twenty pounds of capelin into a pan. Farther along the beach my uncle did the same, drawing in another load.

I tried relentlessly to grab the fast-flippers with my bare hands, soaking my shirtsleeves and pants as I pranced around in pure delight.

In no time, the pans were filled and we headed back to town.

All hands were waiting to help out as we arrived at my uncle's wharf. The capelin had to be picked and dried.

Chicken-wired racks were laid on sawhorses along the beach to dry the plain, corned ones. Smoke racks, made up of one- and two-inch strapping and about two hundred finishing nails, stood about for the corned ones to be hung and smoked. Inside the stage, my uncle prepared the brine (water and salt) in 20-gallon tubs. It was my job to throw a potato in each barrel: if it floated, the juice was ready for pickling, which took about six hours.

In the early afternoon, the sun dressed the harbour with blinding glints as all hands returned to hang and spread thousands of capelin.

Inside the smoker, my father prepared the ingredients to create a special kind of smoke that would stick to the fish. A concoction of dry sawdust, some slabs of natural wood and a few green alders made for the most delicately sweet and smoky fish jerky. It was out of this world!

When all was spread and hung, a sea-salted fishy sensation lingered on the ocean breeze. The elders sat for awhile to divulge their thoughts on a job well done and enjoy a swallow of rum. Sometime later, the spread of dried, corned capelin was bagged by the dozen and all hands cleared out and went home for a feed. The hung ones were placed in the smoker and a smoldering fire was lit. "I'll come back around 2 a.m. and pull the racks out," my uncle said to my father and we went home.

That night, I crawled into bed craving the juicy taste of smoked capelin - my favourite of all.

I wish I had some now. Brought back memories. I love the taste of Capelin

THis was a good capelin catch there, Mr. Garland Whalen