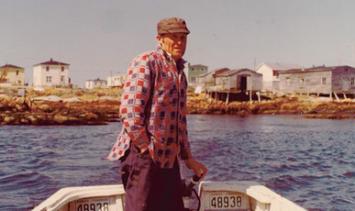 Gilbert John Gill in his earlier years
By Cavell Simms

I lost my dad, Gilbert John Gill, on February 8, 2008, at the age of 84. The days after that were mostly a blur as I went through the motions of living, while yearning for a quiet place to be with my thoughts and memories of him. I found solace in writing about him.

I remember my dad as quiet and gentle. Yet, over the airwaves his voice was always loud, strong and clear as any of the modern-day radio personalities. He was a lighthouse keeper on Cabot Island, Bonavista Bay. Anyone familiar with that part of the coast knows the treachery of the raging sea and rugged coastline, all part and parcel of the unpredictable North Atlantic. The radio was our only connection to our dad when he was on duty as keeper of the light. The lighthouse on Cabot Island in Bonavista Bay, where Gilbert John Gill kept the light.

When the time drew near for Daddy to call home, Mom would gather us around the radio to eagerly await his voice. He would address Mom first, then speak to each of us individually. I remember waiting to hear my name and then thinking how much he loved me. We sure loved him.

Daddy had a passion for music that will forever live in all of us. He said without music, life would be nothing. We would wake in the morning to the sound of the accordion, as welcome as the sun coming up over the water. Our dad loved to sing hymns and when he sang the chorus, it must have reached a chord in his inner soul for it showed in his face and we certainly could feel it in our hearts.

Every evening growing up, suppertime was turned over to the Fisherman's Broadcast. During the program there was to be no laughter or "whiz gigging," as Daddy called it. It was his time to listen to his favourite radio show and we respected that.

My dad never once said no to a neighbour who came calling for his assistance. He was a jack-of-all-trades and mastered them, too. My dad could paint or draw a picture, sew, carve, sing, play the accordion, build a house - anything he wanted to do, he could do.

The one thing I can remember that made my dad the most upset was when the federal government announced the cod moratorium that took away the rights and privileges of Newfoundlanders. When one of the boys came in and told us about the old fellow who was charged for taking one codfish for dinner, that was the last straw for my dad. I think what he could never accept was that we had a government who allowed freezer ships and draggers to rape our spawning grounds and fishing grounds, but he was not allowed to get one to put in the pot.

My dad had a wonderful philosophy. He felt that if you had food to eat and you had your health, you had everything. He lived by not hurting others and doing what he could for his fellow man. A few months ago, a granddaughter of Dad's asked him for some advice on life. He told her to be herself and follow the good writing of Desiderata. This is a writing that we can all take a lesson from. If more of us held the philosophy of my dad and the American poet Max Ehrmann, who wrote Desiderata in the 1920s, what a kind and gentle place this world would be.

Dad loved his wife and nine children, and he knew hardships. He told me that at the tender age of 11, he went fishing on the Labrador and was expected to do a man's work.

Daddy was a man before his time. Though he worked hard from sunrise to sunset, he always found time to help Mom with the housework, including cooking. My oldest brother has a story about how on Sunday morning, my dad would have the duck in the oven and the vegetables prepared for dinner. The aroma of Sunday dinner would drift upstairs, lovingly mingled with the sounds of the accordion.

My father had a wonderful sense of humour, and indeed I have a funny story to share about him. Since he was a lighthouse keeper for many years, he was programmed for the works of Marconi and not Alexander Graham Bell. After we got our telephone, dad would never end a conversation with goodbye - he would always say, "Over and out." We always joked about that. It is so precious now.

In recent months, my dad has been ailing. As we watched him in the hospital room, we knew in our hearts the end was near. We expected it, but when it came we weren't ready to let him go. We know his suffering is now over and we cling to the hope of eventually being reunited. And just as my dad used the lighthouse to guide weary travellers, his light will now guide us. May his beliefs and teachings be our compass and his love be our anchor throughout the storms of life. We love you, Daddy - over and out.

Gilbert was Norman's brother. Norman and Bertha were 2 of the nicest people also. I went to school with Esther, Clar and Mildred. Your Dad like Norman sounds like a gentleman also Cavell.