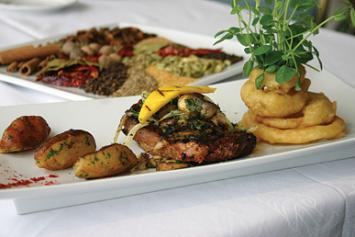 Summertime brings the welcome sound of a sizzling grill. There is nothing quite like a delicious steak cooked on the barbecue.

My favourite cuts of meat for grilling are rib-eye steak and tenderloin. But if you've ever been stumped by what to do with a less tender cut of meat - such as a skirt or flank steak - a good marinade will come to the rescue. A marinade is a seasoned mixture that adds flavour and, in some cases, tenderizes the meat. Marinades are commonly used with thin cuts, such as steaks.

Here are some marinating guidelines, and a favourite marinade recipe of mine.

• A flavouring marinade is used with tender beef cuts for a short time - 15 minutes to 2 hours.

• Less tender steaks should be marinated at least 6 hours, but no more than 24 hours. Marinating for longer than 24 hours will result in a mushy texture. Tenderizing marinades penetrate about 1/4 inch into the meat.

• A tenderizing marinade contains a food acid or a tenderizing enzyme, and is used with less tender beef cuts from the chuck, round, flank and skirt. Acidic ingredients include lemon or lime juice, vinegar, Italian dressing, salsa, yogurt and wine. Tenderizing enzymes are present in fresh ginger, pineapple, papaya, kiwi and figs.

• Marinate in a food-safe plastic bag or a nonreactive glass or stainless steel container. Turn steaks or stir beef strips occasionally to allow even exposure to the marinade.

• Always marinate in the refrigerator; never at room temperature.

• Allow 1/4 to 1/2 cup of marinade for each 1 to 2 pounds of beef. If a marinade will be used later for basting, or served as a sauce, reserve a portion of it before adding the raw beef. Marinade that has been in contact with uncooked meat must be brought to a full rolling boil to kill off any germs, before it can be used as a sauce.

• Never save and reuse a marinade.