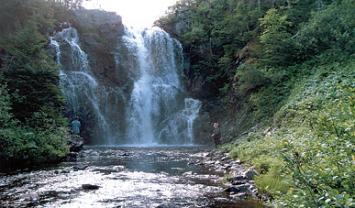 This is a picture diary of our summer vacation with George and Christine Clarke at Winterhouse Brook in Gros Morne National Park, on the Great Northern Peninsula. While we were there, my husband Rodney and his father, George, worked on the roof of their cabin. We also spent time at the fire pit near the water, and Rodney, George and Rodney's brother Adam also got to visit their favourite fishing hole. The view from the landwash, Winterhouse Brook Rod and Dad putting on the deck at the cabin, Winterhouse Brook. A rattling brook on the Northern Peninsula