A Porker of an Idea 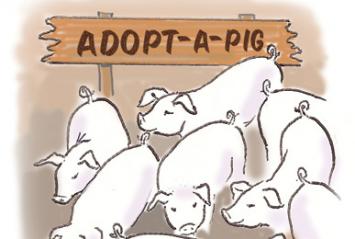 Roosevelt Thompson has been a pig farmer since 1979, when he set out to follow a dream he had always carried to own and operate a farm. That year he bought a farm in Point Leamington, Newfoundland that produced pork and eggs. His customers were mostly grocery stores in the Central Newfoundland area, as well as the provincial government's abattoir in St. John's. Although Roosevelt did some slaughtering at his farm, most was done at the government abattoir, which is where all the other pig farmers took their pigs for slaughter.

Then in 1992 the government abattoir closed, which put all the pig farmers in the province out of business. It also left a void in Roosevelt's business. To survive, he needed more outlets for his product to take the place of sales lost to the government abattoir. All the other producers at the time opted for the government buy-out; unless he came up with a bigger market for his pork, he would have to do the same thing. Meanwhile his daughter, who was just a little girl at the time, had a Cabbage Patch doll that came with adoption papers. This gave Roosevelt an idea.

"When all the hog producers in Newfoundland went out of business, I was caught wondering what I was going to do," he says. "But my daughter's doll got me thinking that perhaps we could start an adopt-a-pig program."

Roosevelt's idea was a simple one: People would pay a $50 deposit on a young pig, which would then be raised to full size (220 pounds on the hoof) at Leamington Farms - a process that takes about five months. The customer would then pay another $200 for Leamington Farms slaughters the pig and butcher it to the customer's specifications. For an additional fee, customers could choose to have sausages, breakfast bacon and cured ham made as well.

Implementing the adopt-a-pig program required an investment of $60,000 (which over the period of a few years turned into more than $100,000 for such things as building expansion, grinders, meat saws, stainless steel sinks and tables, an extra cooler room, a smoker, sausage stuffer, etc.), but it was either that or take the government buy-out and give up his dream of farming. Roosevelt chose to put his money where his heart is.

To make people aware of his idea, Roosevelt made up flyers that not only described his idea but showed the types and numbers of cuts (chops, leg roasts, shoulder roasts, etc.) one would get from a full-grown pig. He distributed his first flyers to households in Twillingate, about a two-hour drive from Point Leamington. The idea worked like a charm, and has been working well ever since.

"After I put out that flyer, I really couldn't keep up with the business," he says. "I had to stop putting the flyer out because I was getting more orders than I could handle at the time."

Sixteen years later, Leamington Farms has become so successful as a pork-producing business that the farm gave up the egg enterprise entirely. One of the reasons for its success is that the enterprise is a "win-win" situation, for the farm as well as the customer.

The farm wins because it never has to produce something it can't sell - the product is presold. Also, the $50 "adoption fee" gives Leamington Farms a working capital to cover expenses until the product is marketable. Some customers pay off the adopted pig in monthly installments, which also helps with the farm's cash flow.

The customer is also a winner: The pork he or she gets is guaranteed fresh, unlike mainland-produced pork, which is at least six days old before it gets to the supermarkets in this province. Leamington Farms' pork is totally grain fed, as opposed to being waste-fed (scraps and food left over by humans, and sometimes animal by-product), which is the case with a number of pork producers in this country. Although some animals supplied to abattoirs by pork producers in mainland Canada are totally grain fed, both grain fed and non-grain fed pigs are slaughtered together and there is no way of the consumer knowing the source of the pork he is buying at the supermarket. Leamington Farms' government-licensed facility guarantees its pork to be grain fed. Not only that, Newfoundland pork is also disease free.

"Pigs in other provinces have many diseases and have to be continually vaccinated, but our pigs have never seen a needle," says Roosevelt. "Before the abattoir in St. John's closed, other countries, such as England were buying our breeder pigs because they had no diseases."