Letters from our Readers 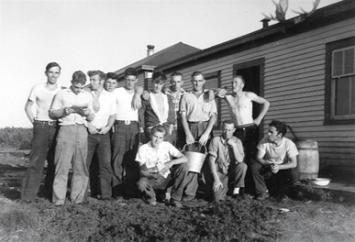 Staff from The Gaff
Dear Downhome; Mike Shufelt and I are collecting stories about the Gaff Topsail, the old railroad community located on the Gaff Topsails, and we need your readers' assistance in identifying the railroad workers in this photo. This group shot was taken at "The Gaff" in 1960 by Ed White, a Frontier College labourer and teacher who was working with the CNR ballast and lift gang. We have the names of his students, perhaps not all those pictured here, and would like some help in matching these up.

Any help in identifying the others will be useful.

If anyone can help in this project, you may contact Floyd by e-mail at floyd.spracklin@nf.sympatico.ca, by phone 709-634-5712, or by regular mail by writing to Floyd Spracklin, 10 Ingrid Avenue, Corner Brook, NL, A2H 6P2.

Elliott Family Reunion
Dear Ron; We are having an Elliott family reunion August 8-10 for all descendents of Thomas Elliott, who was the first settler of Port Albert in 1883 (then known as Little Beaver Cove). Thomas had three sons - Herbert, James and John - and four daughters: Rachel married Joseph Bennett; Rhoda married Gideon Day; Jennie married a Pelley and later, an Ackerman; and Margaret married George Mercer. They were my grandparents.

There may be many relatives who we do not know about, and I would like for anyone who has not received an invitation to contact me. I would appreciate your help.

Descendents of Thomas Elliott, the first settler of Port Albert, who would like more information about the family reunion planned for August may contact Margaret by telephone at 709-241-3271, via e-mail at sidmercer@nf.sympatico.ca, or by writing to her at General Delivery, Port Albert, NL, A0G 3R0. Dear Ron; I've been a Downhome subscriber since last July when I revisited Glovertown, near Terra Nova National Park. My first time in your picturesque province was back in 1983 when I began my park warden career in Terra Nova. I worked there six months before I returned home to Cape Breton. I went back to Terra Nova in 1994 to work for another nine-month term before I transferred to the Quebec lower north shore in 1995.

The reason I'm writing is to respond to the letter written by Rev. Walter Sellars from Ottawa, in the June 2008 issue, asking about the picture on the puzzle he found in a second-hand store. Seeing the photo while leafing quickly through the magazine, it seemed to me I had seen this scene before. What triggered my memory is the two Canadian flags (one at the small wharf; the other near the cabin on top of the hill). I could be mistaken but it reminded me of Park Harbour Warden Station, located in Terra Nova National Park. The station used to be manned by seasonal wardens and it was also used for boaters to drop in for information or in case of emergency.

Thanks for your letter, Gerald. I have no idea where this puzzle place is (pictured below), however we've also heard from two other readers offering opinions. Irving Saunders of South River, Newfoundland, thinks it's a cabin located on either Joe's Lake or Crooked Lake just north of Badger on the Trans-Canada Highway; Richard Carroll of Gander also says it's a cabin that can be seen from the TCH, but that it's located at Paul's Lake, between Badger and South Brook.

Dolly's Tolerance On YouTube
In the March 2008 issue of Downhome, I really enjoyed your article in the "Notes from Home" section about Dolly's Tolerance, the airplane built by Ivan LeDrew. I'm sure many of your readers enjoyed this story as well, which brings me to the reason I'm writing: A video of the Dolly's Tolerance in flight can be viewed online. Just search the phrase "Murphy Rebel airplane amateur built floatplane landing."

B. Myles
Via E-mail

For anyone interested in watching the airplane video, it's on the YouTube Web site at the following page: http://ca.youtube.com/watch?v=HPBU45-7U7o.

Teacher and Class Reunion
Dear Ron; We are traveling to Newfoundland this summer to spend some time with my family in St. John's. My wife is looking forward to her first trip to one of the most beautiful provinces in Canada. Her parents are coming with us for a week to reminisce about their time spent in St John's in the 1950s as a newly married couple stationed there with the Canadian Air Force. It is their first trip back and most likely their last!

While Mr. Harry Hillman (my father-in-law) was in the Air Force, Mrs. Verneal Hillman taught at the Holloway School in 1954-55. I am including some pictures of the school and the Grade 3 class that she taught. I don't believe that the school is still there, but we thought it might be nice to see if some of her former students want to be reunited with their old teacher.

Seeking White Pudding Recipe
Dear Ron; Well another subscription was just placed with your wonderful newsy magazine that I prefer to call a book, as there is so much enjoyment inside those covers. Although I am not a Newfoundlander I feel like one; I have been married to one for 17 years and I love your wonderful province! My husband is from Mary's Harbour and we usually go home every other year.

I am looking for the recipe for white pudding and I hope someone in your reading audience will be able to help me with this request. It is one of my husband's favourites and I would like to surprise him.

If any readers can help Betty with a recipe for white pudding, they may e-mail her at dan.cumby-betty@sympatico.ca.