Ferryland, Renews and the Florizel 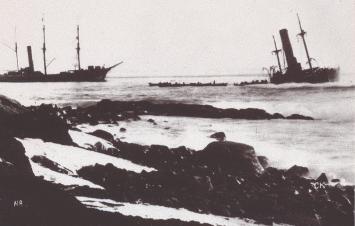 Located in the heart of the Irish Loop is beautiful, historic Ferryland, where the seashore is scarred by shipwrecks and the landscape is steeped in storytelling. In this community even innocuous statues in a churchyard have a fantastic story behind them.

As the gregarious Charlie Dunne of the Restoration Foundation notes, "Holy Trinity Church, consecrated in 1865, is the oldest remaining stone Roman Catholic Church in Newfoundland. There were five stone churches built under Bishop Mullock and this last one is an example of rural Gothic style. Local people helped with the construction using stone quarried at Stone Island near the tip of Calvert Harbour."

The life-size metal Passion statues were salvaged off the October 1926 shipwreck of the Torhamvan, which was bound from St. John's to Trois Rivières, Quebec. Charlie explains, "That had been a very bad year for the fishery and people were hungry. Legend has it one of the nuns had school children say a Novena to St Jude Thaddeus (Patron Saint of Hopeless Causes) for something to happen to feed the poor. After the Novena was over, that night the Torhamvan ran aground with all kinds of provisions aboard that fed the poor of Ferryland. Rumour has it the collection of statues was going somewhere else, but was given to the people of the area for saving the lives of the crew of the Torhamvan. Whether that was the case or wasn't I don't know, but they ended up here."

Charile adds, "Mr. Paddy 'Iron' McCarthy is a fine old fellow and if he says it was him and his buddies who actually brought the statues ashore, I've no reason at all to doubt him." (See the June issue for the story Paddy "Iron" McCarthy, at 104 years old, has to tell about the wreck of the Florizel.)

The interior of Holy Trinity Church is also home to the remnants of a spectacular Italian marble altar, originally raised as a memorial to local soldiers killed in the Great War. This altar actually survived a direct dynamite blast and you can still see the cracks in it - but that is a story for another day.

Fast Facts about Renews and the Florizel

• The ship's name is from Shakespeare's The Winter's Tale, in which "Florizel" was a prince of Bohemia. In other literature, Newfoundland author Cassie Brown wrote a compelling book called A Winter's Tale: The Wreck of the Florizel, commemorating the disaster and rescue efforts during a fierce storm.

• Among the victims of the Florizel was three-year old Betty Munn. In memory of this "little girl who loved the park," Sir Edgar Bowring donated to the children of Newfoundland what is arguably the most beloved monument in the province, the statue of Peter Pan in Bowring Park, St. John's. (Unveiled on August 29, 1925, it is a copy of the original Peter Pan statue by British sculptor Sir George Frampton. The original was installed in secret, so as if to appear by magic, at Kensington Gardens, London, by author J.M. Barrie as a gift to the children of London on May 1, 1912.)

• Another iconic memento of the Florizel, the ship's bell, was damaged but was recovered from the ship and is currently on display at the Barbour House Living Heritage Village in Newtown, central Newfoundland.

• Renews' most famous son, Captain William Jackman, exemplifies the hardiness associated with people of the Southern Shore. On October 9, 1867, he rescued 27 people from the stricken schooner Sea Clipper off Spotted Island in Labrador by swimming to shore with them - one at a time. Jackman has been recognized by England's Royal Humane Society, Canada Post's "Legendary Heroes" Stamp Series of 1992, and the Captain's Table Restaurant in Mobile, named after him. (Read the full story about Jackman's courageous actions, as printed in the June 1996 issue of the Downhomer, in our Reminiscing section.)

• Even the vegetation in Renews is so incredibly enduring that it has become legendary, particularly the ivy adorning Our Lady of Lourdes Grotto at Holy Apostles Roman Catholic Church since about 1927. On the coldest of winter days, leaves clinging to statues at "Mass Rock" remain defiantly green. Resident Lucy Conway chuckles while retelling the story of a priest who tried to remove it years ago, "...it just grew back stronger than ever after he left," she says.