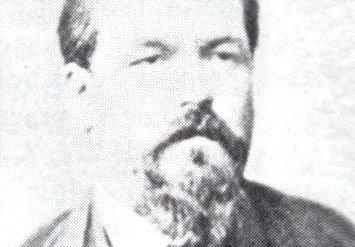 Captain William Jackman will go down in this province's history as a hero for his valiant efforts rescuing nearly 30 people aboard a fishing schooner near Spotted Islands, Labrador in 1867. Encyclopedia of NL photo.
By Rev. John E. Currey
(re-printed from the June 1996 issue of the
Downhomer)

Down through all the years that men have gone to the sea, it is difficult, if not impossible, to find any act of courage and determination compared to that of Captain William Jackman of Renews, on the Southern Shore of Newfoundland.

He and his brother Arthur went to sea at an early age with their father, who was a captain engaged in the cod and seal fishery. Both lads quickly learned the sea and all its ways: Arthur was called "Viking Arthur" for his daring skill - he commanded his first schooner on a voyage to "the Front" at age 22. His first steam vessel was the Hawk and he was given command of her on her first trip. He also commanded the Falcon, the Aurora and the Eagle, and helped get Robert Peary to the Arctic on his first voyage north. Arthur was later Master of coastal vessels, and when he died in 1907, he was marine superintendent for Bowring Brothers.

William, six years older than Arthur, was captain of the schooner Skipsworth at age 18. Between age 30 and 39, he was Master of the Hawk and the Eagle. He is chiefly remembered for an act of unequalled courage and strength that he performed one night in October 1867. His noble deed is commemorated in a poem by Marcus Hopkins, called "Jackman the Hero"; in Joseph R. Smallwood's Encyclopedia, Vol. 3; in "The Rounder," August 1979; and in writings by Michael Condon (1925) and by H.Y. Mott (1894).

Jackman was at Spotted Islands, Labrador, and was invited to stay at a friend's home while a fierce storm was raging. He said later, "I felt something telling me to take that course (take a walk to the headland)." As the view opened up over the headland of the sea thundering in on the rocks, he was shocked to see a small fishing schooner being battered on a reef, about 600 feet out from the landwash.

Jackman knew that the schooner could not last more than an hour or two. He sent the man who was with him back to the community for ropes and help, and since he knew no boat could possibly survive in that surf, he quickly pulled off his rubber boots and his coat, and plunged into the sea that was foaming in over the rocks. He was a very strong swimmer, but you know it took a tremendous effort for him to reach the side of the doomed schooner.

One of the crew of the Sea Clipper went over the side of the schooner, and William Jackman took the man on his shoulders and struck out for the shore. He managed to make it to shore with the man, and then immediately turned about and swam back to the wreck. Incredible as it seems, 11 times he made it from ship to shore with a man on his back! When he made shore with the eleventh, his companion arrived from the community with a long rope.

Jackman tied the rope around his waist and again plunged into the boiling surf and fought his way out to the schooner. With those on shore helping by hauling on the rope, Captain Jackman made 15 more trips out to the wreck. Making it to shore with the 26th man, he asked the survivors if there was anyone else on board. They said there was a dying woman down in the cabin, but in her condition she would never survive a rescue attempt. They said, "It would be foolish to risk your life again in a hopeless cause."

"Living or dead," said Captain Jackman, "I'll not leave her there." He plunged again into the raging surf. Reaching the schooner, he climbed on board, went down to the cabin, picked up the woman in his arms and went over the side one last time. He made it to shore with her, but the sea was too much for the woman. After thanking Captain Jackman, she passed away.

When Jackman's father heard about his son's incredible feat of bravery and strength, his comment was, "If you had not brought that woman ashore, I would never have forgiven you!"

The next year, 1868, the Royal Humane Society presented Captain Jackman with a certificate and a medal for his courage and humanity. After receiving it, William handed it to his wife, asked her to put it away and never again referred to it. The unparalleled exploit damaged his health beyond repair. He passed away 10 years later, at age 39. It was a young age certainly, but it is as John the disciple wrote in the Book of Revelations (14:13): "that they may rest from their labours, and their lives speak for themselves."

Editor's Note: While Jackman's heroics have been officially recognized many times over, his hometown of Renews, Newfoundland bears no obvious monument to the man - but this may soon change, thanks to the Renews-Cappahayden Heritage Preservation Committee Inc. To support the Committee's efforts to erect a memorial to Jackman, the public may make cheques payable to "Captain William Jackman Memorial Statue Fund" and mail to: P.O Box 47, Renews, NL , A0A 3N0.

For more information about this project, see "Saluting the Captain" in the April 2012 issue of Downhome, email gjackman@nf.sympatico.ca or mike_chidley@yahoo.com, or visit the campaign's Facebook page.

An amazing man and should never be forgotten.