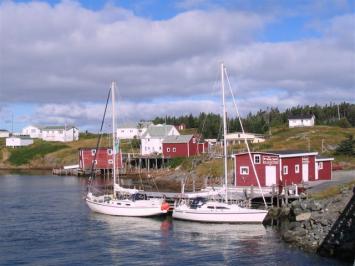 The Burgundy Squid Cafe in 2007 - one of many stages on Change Islands renovated by husband and wife team Herb Bown and Maureen Woodrow.
As I sit down to write my column for June - Downhome's 20th anniversary issue - the thought that sticks in my mind is the old saying, you can never go home again. You may get there in body only to find the spirit of the place where you grew up has vanished. Buildings that housed your memories have been torn down, remodeled or replaced; old friends have moved away or have changed beyond recognition. This happened to Herb Bown - but not quite.

Herb grew up in Badger's Quay, Newfoundland. In 1966 he received a masters degree in electrical engineering from the Technical University of Nova Scotia (now Dalhousie). He then moved to Ottawa and launched his career. Herb's creative mind led him to accomplish great things, earning him numerous awards - including the Order of Canada - for his contributions to society.

Herb received the Order for several things that came out of Interactive Visual Communications Systems, a technology he developed and patented in the U.S. and Canada in 1981. His company, Teledon, used this system as a means of sending text and colour graphics and images over the telephone system before the advent of home computers and broadband communications. A precursor to today's Internet, it incorporated a decoding device that converted text and images to electronic signals on the sending end and back to printable text and colour graphics and images on the receiving end. The system was used widely by government agencies and big business, including Bell Canada, CBC, the Toronto Star, banks, cable companies and universities.

An offshoot of Herb's patent was a system for non-speaking, physically handicapped children. This technology enables the kids to communicate with others over telephone lines through the use of Blissymbols, a symbol language created by Charles Bliss.

Herb and his research team became involved in a number of award-winning projects, including work on Canada's Alouette and ISIS satellite systems, which kept him very busy, but he still had salt water in his veins. He visited home often, bringing his children with him so they could appreciate the cultural experiences he had enjoyed in his youth.

Over the years, one of Herb's dreams was to use his skills to benefit Newfoundland and Labrador. In 1994, he started Idon East Corporation in St. John's, which has since become a leading player in the global electronic learning industry. Among Idon's clients are the United Nations, UNICEF, Canada Post, and the World Bank in Washington, D.C.

But Herb Bown is from an outport, not St. John's, and it was to the outports that he was drawn to play a more active role. Badger's Quay, however, had become modernized. The fishermen's wharves, stages and stores were gone, along with the romantic appeal.

Then in 1999, Herb and his wife, Maureen Woodrow, visited Change Islands, where there were lots of stages, stores and wharves, although they were starting to fall into disrepair. Like all positive-thinking people, Herb didn't see this as a problem; he saw it as an opportunity.

The couple bought a home on Change Islands and later started the Stages and Stores initiative. One of the objects of this initiative has been to repair and refurbish the old fishing premises, and the other was to provide much-needed employment on the island.

Herb and Maureen oversaw the refurbishing of a number of old premises on the island, encouraging the residents to get involved. This effort has resulted in walking trail enhancement, the creation of an interpretation centre, and the Fishermen's Museum. Torraville stage in 1999, before renovation transformed it into the Burgundy Squid Cafe.

Stages and Stores Incorporated has both non-profit and for-profit aspects. The company hires local artisans to produce arts and crafts products, and local skilled workers to repair and maintain historic heritage fishing properties.

Artisans are supplied with materials and paid for each piece of work completed. All supplies for heritage restoration are purchased through local general stores. The markets for the crafts are local, national and international and the company's wholesale operation supplies more than 65 retail outlets in North America.

The couple's enthusiasm has caught on, not only with locals, but visitors as well. Local fisherman Pete Porter, who has been collecting antiques for years through his work around the island, built a building on his property and filled it with these old items in the style of an old general store, called the Olde Shoppe Museum. He also offers Pete's Putt Putt Tours, in an old restored motorboat with a "make and break" one-cylinder engine.

Thanks to Herb and Maureen's efforts, people from other parts of the province, and the world, have been buying homes in Change Islands. Among them are Beverly Stevens and David Carlson of Ottawa, who bought a home there in 2003. Inspired by a 2004 article in Downhome magazine on the plight of the Newfoundland pony, Beverly bought a pony advertised for sale in Tilting.

The couple has since created the Change Islands Newfoundland Pony Refuge, and now owns a herd of 10 of these wonderful animals, with three in foal, giving readers three more reasons to visit Change Islands this summer. And while you're there, drop in at the Burgundy Squid Cafe and say hello to Herb and Maureen - they'll tell you all about the changes on Change Islands. Visit www.stagesandstores.com to find out more.
MORE ARTICLES
load more