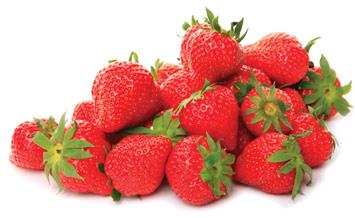 The best way to enjoy fresh strawberries and raspberries is by planting your own. Berry plants like full sun and well-drained soil. When planning a berry patch, choose your location accordingly, and set out plants as early as possible once the ground thaws.

Strawberries
Avoid planting strawberries in raised beds because freezing and thawing in winter can damage them, and make sure all perennial weeds like grass and dandelion are removed from the site before planting. Soil preparation for strawberries is important. Mix organic matter, lime and bone meal thoroughly with the soil prior to planting. Apply lime at a rate of 7 kg for every 10 m2 and bone meal at a rate of 1 kg for every 10 m2. Do not allow fertilizer to come in direct contact with the roots, as they are extremely sensitive to fertilizer burn. An alternative to bone meal is a plant starter solution (10-52-10), which can be applied after planting.

Plant the strawberries so that the crown of the plant is just at the surface of the soil and not covered. Set them about 30 cm apart in a row with the rows about 1 m apart. It is important to keep weeds out of the strawberry patch because when runners start rooting in the row, it becomes very difficult to remove weeds.

Once the plants are actively growing, apply a soluble fertilizer like 20-20-20 or 20-8-20 mixed at a rate of 15 ml in 4 L of water. Another option is to apply about 15 ml of a general-purpose fertilizer like 6-12-12 around each plant. During winter the strawberry patch can be mulched with coarse straw or boughs to protect it from freezing and thawing in the winter. In some regions it may not be necessary to mulch.

Strawberry plants will produce a small amount of fruit the first year but you get the main crop the second year and subsequent years. You can pick off the blossoms the first year to get stronger growth but this is not absolutely necessary. A productive patch should yield a litre of strawberries per plant.

Spring is the best time to plant raspberries, especially bare root dormant raspberries. Actively growing containerized raspberries can be planted any time during the summer, but keep in mind that they require a full growing season to become established before they start producing fruit. There is no advantage to planting raspberries in the fall and the plants may be more susceptible to freeze-thaw damage during the winter.

To prepare the ground for a new raspberry patch, add organic matter (such as peat moss), agricultural limestone (5 kg per 10 m2), and general-purpose fertilizer (e.g. 6-12-12 fertilizer at 2 kg per 10 m2). Make sure these ingredients are mixed thoroughly with the soil. Plant the canes 45 - 60 cm apart in a row and allow at least 150 cm between rows. An easy technique is to prepare trenches instead of planting the canes individually.

For established plants, apply a general-purpose fertilizer (such as 6-12-12) each spring once the weather warms up, usually around late May.

The important principle in maintaining a good raspberry patch is to prune the branches or canes on an annual basis. In the year that you plant the raspberries, no pruning is necessary. In the fall of the second year, remove the canes that produced fruit. Raspberries bear fruit on second-year growth, meaning that the new growth coming up this year will produce fruit next year.

Canes that have produced fruit one year will not produce fruit the next. Fruited canes must be removed at ground level to make room for the new canes. This can be done immediately after harvesting up until early winter. If the new canes have grown really tall, the tops can be cut back about 30 cm or so without sacrificing the next year's crop. It is important to prune every year to keep the raspberry patch productive.

Remove any canes that grow outside the established row. Raspberry canes produce underground shoots so they'll spread all over the place if you don't keep them under control. These canes that are outside the row can be pulled up whenever it is convenient, but usually this is done early in the season. Maintaining a narrow row will also enable you to cultivate between the rows with little difficulty.

Tie the new canes to a support such as a wire strung tightly along the row, or to individual stakes with the raspberry canes tied in a bunch. Do this when you are cutting out the old canes. This will support the canes during the winter and keep them from being broken by snow and wind.