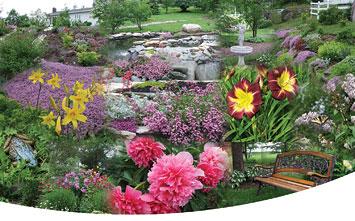 A collage of photos from the Thomases' garden
By Susan Thomas

While many households pride themselves only on what is inside their house, my in-laws, Gerald and Gertie Thomas, take pride in the many things outside their home.

As early as April, the window sills of their house are lined off with dozens of cups of newly planted flowers and vegetable seedlings. From the first time the ground can be turned in spring, until well after the first frost in October, the Thomas family of Musgravetown is working at their garden, which has been years in the making - from an old bog came a garden that is truly a sight for sore eyes. Today it contains many varieties of fruit trees, a berry patch that supplies enough berries for any family to last a winter, a vegetable garden, a greenhouse full of tomatoes and greenpeppers, an abundance of flowers, and of course Nuisance, the family pet horse. Their garden is so beautiful it is often referred to as a "park" by the locals.

My in-laws put significant work into their property in the summer of 2006 so that myself and their son David would have a beautiful backdrop for our October wedding. I would love to have the opportunity to showcase their garden to all of your readers as a way of thanking them for all their hard work.

Is there a beautiful garden that you'd like to have showcased in Downhome? Submit a selection of colourful, sharp images by clicking on "Great Gardeners" (see "enter now" at the bottom of this page). Please ensure that digital photos are high-resolution quality: 300 dpi or about 1M each.) Later in the year, we will publish a special feature on our Great Gardeners.